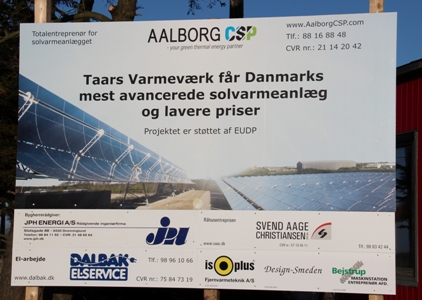 7 January 2015 was the starting date for the construction of a unique solar heat plant for district heating in the Danish village of Tårs, 30 km north of Aalborg. It combines parabolic trough collectors and flat plate collectors in order to cover 30 % of the heat demand by the village’s district heating network, without the need for seasonal storage. The system is expected to come into operation during the second quarter of 2015.
Photo: Aalborg CSP
The solar plant will consist of 4,039 m² of parabolic trough collectors supplied by Aalborg CSP and 5,972 m2² of flat plate collectors manufactured by Arcon Solar. According to Per Aasted, Sales Engineer at Aalborg CSP, the design of the parabolic trough collectors is similar to the one of Eurotrough collectors, which are used in solar thermal power plants all across the world and include receiver tubes by Italian supplier Archimede Solar Energy.
CSP and flat plate collectors a perfect match
Danish engineering company JPH Energi, the technical advisor, carried out the simulation of the innovative system. The flat plate collectors will preheat water to 60 to 70 °C, starting from 40 °C return feed temperature, and produce 15 to 20 % of the required district heat. Then, the parabolic trough collectors will heat the water up to 90 to 95 °C, which is the required temperature for the district heating network or the two already available short-term storage tanks with a capacity of 1,100 m³ each. According to JPH Energi’s simulation, this two-step heating method based on the best working temperature for each type of collector is said to result in specific annual solar yields for both flat plate and parabolic trough collectors of around 600 kWh/m².
Whereas flat plate collectors have their maximum production around midday, the parabolic troughs reach maximum output between noon and afternoon. They are aligned from north to south, so they track the sun from east to west. This means that in the middle of the day, the aperture is facing straight up into the sky. Because in northern Denmark, the sun does not rise higher than 57 ° even in summer, the collector will not be directly facing the sun on midday.
Oversized collector to avoid seasonal storage
To achieve a 30 % solar share without seasonal storage, the plant is actually oversized for the hot water demand in the summer months. “We widened the angle of the flat plate collectors, so that they reach maximum output in spring and autumn,” Ib Hansen, Technical Director at JPH Energi, explains the design enhancements. To avoid overheating issues in summer, the parabolic trough collectors are simply put out of focus.
The project was supported by the Energy Technology Development and Demonstration programme (EUDP) of the Danish Energy Agency. Researchers from the Technical University of Denmark, DTU, will verify the data and use the plant to set up calculation models in order to develop further plants of this type.
According to the chairman of the cooperative district heat provider Tårs Varmeværk, Jens Vestergaard, the solar plant is said to reduce heat generation costs significantly. He expects a heat price for costumers of 0.45 DKK/kWh (0.06 EUR/kWh) including solar heat instead of 0.550 to 0.590 DKK/kWh (0.074 to 0.079 EUR/kWh) for heat only from a gas-condensing boiler. According to Aasted, the combination of the two technologies has the potential to bring costs down to 0.22 DKK/kWh (0.03 EUR/kWh). “We have several other projects in the pipeline,” Aasted says. Monitoring results in Tårs will show whether the ambitious targets for solar yield and heat prices can be achieved.
More information:
EUDP programme: http://www.technology-development.eu/eudp
Tårs district heating: http://www.taars-fjv.dk/dit-varmevaerk/nyhedsarkiv/solvarme-i-taars
Aalborg CSP: http://www.aalborgcsp.com/projects/concentrated-solar-power/solar-district-heating-system-in-taars-denmark.aspx
JPH Energi: http://www.jph.dk/
Archimede Solar Energy: http://www.archimedesolarenergy.it/