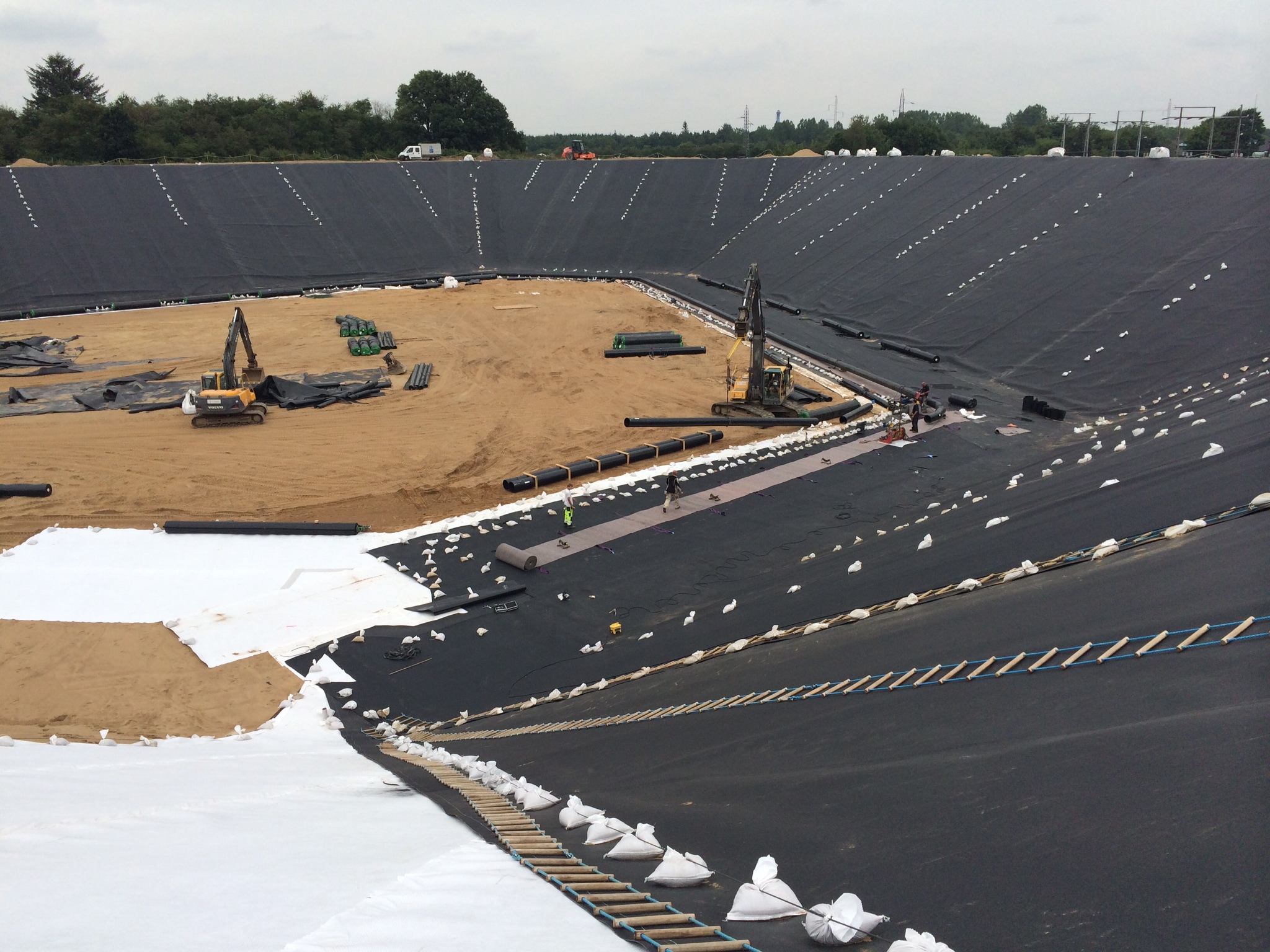 Construction has begun on another large-scale installation: This time, the new number one solar thermal plant in the world will be in Vojens, a small town in southern Denmark, near the city of Kolding. The customer is Vojens District, which signed a contract with Danish collector manufacturer Arcon Solar this May about delivering and installing a 37 MWth collector field (52,491 m²). The 4,166 collectors will all be produced in Arcon´s factory in Aalborg. At present, the seasonal pit heat storage with 203,000 m³ is underway: Vojens District is uploading pictures once a month and the ones from August show the lining of the huge water-filled basin with high-density polyethylene foil (see photo). The currently largest solar thermal plant, a 26 MWth installation with 61,700 m³ of seasonal storage, is located in the Danish town of Dronninglund.
Photo: Vojens District
Vojens District decided on Danish consultancy Ramboll to head the construction and commissioning of the entire installation. Solarthermalworld.org spoke with solar district heating specialist Flemming Ulbjerg from Ramboll about the construction timeline. The lining of the seasonal storage carried out by German company GSE Lining Technology should be finished at the end of September. “It takes round about 4.5 months to fill the 203,000 m³ of water into the basin. In February, we will then carry out the top insulation of the tank,” Ulbjerg explains.
1,000 m² of collector area installed each day
Once the support structure has been set up and the pipework laid, Arcon can install up to 1,000 m² of collector area per day. This means that the set-up of the solar field is going to take 1.5 to 2 months and can either be completed in late autumn of 2014 or in early spring of 2015 – depending on how good the weather will be. Commissioning is planned for May 2015.
Vojens District has already been operating a solar thermal field of 13 MWth since 2012. This field is going to be connected to the new seasonal storage area. “Without storage, the solar share of the households is typically 20 to 25 %, whereas the share increases to 55 to 60 % with seasonal storage – and you should get even higher,” Søren Elisiussen, CEO of Arcon Solar, says.
Town with 9 m² collector area per head
According to Danish website http://www.solvarmedata.dk, which gathers solar performance data from all the larger solar thermal fields in Denmark, the 13 MWth installation in Vojens produced 9 GWh over the last 12 months, which corresponds to a specific yield of 463 kWh/m² of collector area. According to solvarmedata, the estimated total annual heat production was said to be 10 GWh, amounting to 20 % of the total heat of 49 GWh sold in 2013/2014. After the extension, the town of 7,655 will have a 50 MWth plant, which means an installation ratio of 9 m² per head.
The investment adds up to around Danish Krone (DKK) 120 million (EUR 16 million) and meets around half of the heating and hot water needs of 2,000 households. According to Ulbjerg, the investment costs are divided into three categories: The solar field, including support structure, pipework and heat exchangers, costs around DKK 70 million (58 % of the project costs). The seasonal storage adds another DKK 30 million, and DKK 20 million is spent on consultancy work, the purchase of land, the construction of a small technical building and a certain reserve.
The installation of additional district heating pipes was not necessary since all 2,000 households were already connected to the district heating system. The Danish government has banned the installation of new biomass boilers instead of gas boilers when district heating networks are not extended. The Vojens installation therefore competes against highly taxed gas, which increases the cost effectiveness of solar energy.
More information:
http://www.solvarmedata.dk
http://www.ramboll.com/
http://www.gseworld.com/
http://www.arcon.dk
http://www.vojensfjernvarme.dk