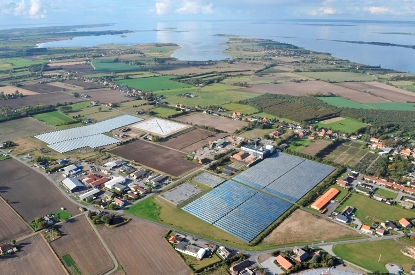 The new seasonal pit heat storage Sunstore 4 is at the heart of Marstal´s extended solar district heating network. The town on the Danish island of Aeroe receives 55 % of its heat from the 33,000 m² of solar collectors. The pit heat storage installation, the first of its kind, was a difficult undertaking – the team had to cope with heavy rainfalls in the summer and a thick layer of ice in the winter of 2012, when the underground storage was still not covered. June 2014 was the official end of EU project Sunstore4, which contributed EUR 6.1 million to the extension and the monitoring of Marstal´s district heating plant, but work will go on. Marstal Fjernvarme now hopes to receive support from the Danish government.
Photos: Marstal District Heating

The Sunstore4 project boasts 75,000 m³ of newly constructed heat storage (seven times as much as the previous one), which was constructed by PBJ Miljø, Denmark, and consists of a huge water-filled basin lined with high-density polyethylene. The storage space is covered with foil, as well as 15,000 m² of new collector area (added to the previously installed 18,000 m²), a 4 MW wood-chip boiler and an electrical heat pump (1.5 MW). Together, they supply the town of Marstal with 100 % renewable energy. An Organic Rankine Cycle additionally produces electricity for the public grid. The total budget of the Marstal extension project was EUR 15.1 million, including EUR 6.1 million of subsidies from the seventh EU framework programme.
The project achieved the cost targets of between 30 and 60 EUR/MWh for its various heat sources, with solar heat prices around 30 EUR/MWh, as well as the investment cost target of 33 EUR/m³ for the seasonal storage tank. Still, economics are tricky: Wood chips seemed to be the most cost-efficient solution at the time the system was planned. But the Drax wood-chip power plant in Yorkshire, UK, has driven up their prices in the meantime. On the other hand, the Danish government has cut the electricity taxes on heat pumps in half. “If I were to calculate the economics for a project today, I would opt for a heat pump,” Lasse Kjaergaard Larsen from Marstal District Heating says. “At least, we can always count on solar energy to be free of charge,” he adds.
Dronninglund benefits from lessons learned at Marstal
The construction of the pit heat storage started in summer 2011, and not everything went according to plan, as both Per Alex Sørensen from technical consultancy PlanEnergi, the company responsible for the system’s technical design, and Larsen can confirm. One side of the dug-out hole collapsed due to heavy rainfalls in summer 2011. Delays were inevitable and in winter, the storage was still without cover. Then, an ice layer – up to 13 cm thick – formed, and during the next ten days, team members had to remove the ice off the steel tower in the middle of the storage which houses the piping. “We were afraid that the ice might lift the tower and destroy the pipes,” Larsen says. Later on, in May 2013, when the cover foil was added, the team discovered corrosion at the tower. By the time the first analysis was done, the water had reached 60 °C, so the tank could not be repaired before January 2014, when the storage had cooled down to 35 °C. A team of industrial divers repaired the corroded tubes, removed soil which had entered the water during construction and caused the problem and also welded the lining at the bottom – through a damaged weld seam, the storage was losing around 50 m³ of water per day. “Now, the initial difficulties have been solved,” Sørensen says. In Dronninglund, where a 37,573 m² collector field and a 61,700 m³ storage tank were inaugurated in May 2014, the team was able to benefit from the experiences made at Marstal: The tower and the tubes were made of stainless steel, a diver checked the storage for soil and dirt before commissioning, and the weld seam was checked three times.
New cover foil reduces heat losses by 60 %
The cover foil in Marstal was made of a new material, which contains polyethylene foam and a high-density polyethylene lining. It is supposed to reduce heat losses at the top side by 60 % compared to the small existing storage. It was soldered from 2 m wide stripes. Its expected lifespan is 20 years at a maximum temperature of 80 °C, which is the limit for the storage space. “If we increase the temperature to 90 °C, the expected lifetime will go down to four years,” Larsen says. The cost for the foil is around 5.5 EUR/m².
Natural stratification in the storage is supported by a heat pump (1.5 MWth), which supplies heat from the lower part to the centre. It is mostly driven by surplus wind energy, causing production peaks in the Danish electricity grid. The heat pump will have no effect on system costs, however: The Danish government guarantees an electricity price of 1 DKK/kWh (EUR 0.13/kWh), which results in a heat price of 280 DKK/MWh (EUR 40 EUR/MWh) for the heat pump.
More information:
Sunstore4: http://www.sunstore4.eu
Marstal Fjernvarme: http://www.solarmarstal.dk
PlanEnergi: http://www.planenergi.eu
Sunmark: http://www.sunmark.com
PBJ Miljø: http://www.PBJAS.dk