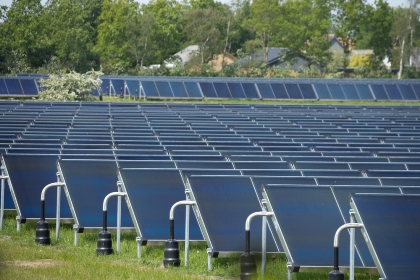 The first solar district heating collector field in Denmark with direct-flow, aluminium absorbers from Finnish company Savo-Solar came into operation in July 2015. Municipal district heating company Løgumkloster Fjernvarme had ordered 9,400 m² of collector area (6.6 MWth) during the first phase of the project. “If we are satisfied with the performance, we will extend the collector field by 35,000 m² next year,” confirmed Peter G. Andersen, Head of Operations at Løgumkloster Fjernvarme. Savo-Solar used this demonstration project for a successful entry into the Danish district heating market, which was dominated by only one supplier, Arcon-Sunmark, since a merger in February 2015. The Finnish collector manufacturer won the tender by Jelling Varmevaerk in June 2015 and negotiated the final contract for the delivery of 15,000 m² collector area (10.5 WMth) with the municipality in southern Denmark. The utility aims at receiving the permits and confirming the contract by the beginning of November.
Photo: Savo-Solar
The preparation for the Løgumkloster project started in 2012 with talks between Løgumkloster Fjernvarme and Sapa (former Hydro), the producer of the aluminium profiles which Savo-Solar uses in its collectors. The Multi-Port Extrusion (MPE) profiles are produced in a Danish factory in Tønder. “Aluminium is a lot cheaper than copper and the field with Savo-Solar collectors looked good,” Andersen names the reasons for targeting a project with Sapa/Hydro. The district heating company has received a grant of around EUR 0.85 million from the Energy Technology, Development and Demonstration Programme, EUDP.
Cost-effective mounting system
“We have patented a pipe system for the field, with the collectors being so close together that we were able to improve the energy density of the field and reduce heat losses,” explains Jari Varjotie, Managing Director of Savo-Solar. “Because of the collectors being mounted directly next to each other, we have also been able to halve the number of rammed piles for the support structure, which is a cost-saving factor.” The photo above shows an evenly stretched out solar field, because there are no pipes above the collectors. According to the company, “this avoids shade impact and improves the field’s visual appearance” – another advantage over the competitors from Denmark.
“We are happy that – after careful evaluation by the customer – Savo-Solar has been chosen to negotiate the final contract in Jelling,” Varjotie was quoted as saying in a press release from 23 June 2015. The conditional contract is planned to be finally confirmed in November and the solar collector field would be delivered and installed in April 2016. The Danish market for district heating is the biggest one in Europe and is showing dynamic growth: According to the statistics by the European Solar Thermal Industry Federation (ESTIF), market volume grew by 53 % from 117,170 in 2013 to 179,186 m² (125 MWth) in 2014.
Performance guarantee by collector supplier
“What counts for the district heating companies in Denmark is a low price per solar kilowatt hour, because they want to reach a low energy price for their clients as well,” explains the managing director of Savo-Solar. “They are very professional in their tenders and compare the efficiency of the different projects among each other.” An important success tool is the performance guarantee. “The supplier guarantees a certain product performance and this performance will be verified in use,” explains Varjotie.
Savo-Solar was founded in 2009 with the aim of coating absorbers in the factory in Mikkeli, Finland. Since 2011, the company offers collectors including the MPE absorber for large-scale projects. Since 2 April, the company´s shares have been traded on First North Sweden maintained by NASDAQ OMX Stockholm. In Denmark, the company had to cope with some delays in realising its projects, which forced company management to lower the revenue estimate in January 2015, from EUR 4 million down to EUR 2 to 2.5 million. Even temporary layoffs of the approximately 30 employees were announced for August and September. With Løgumkloster’s order of an additional 5,500 m² to be delivered in January 2016 and the newly signed contract with Jelling Varmevaerk, it fortunately doesn’t look as if the process will have to be repeated in 2016.
More information:
http://www.savosolar.com&nbsp;
http://www.lgkfjernvarme.dk/