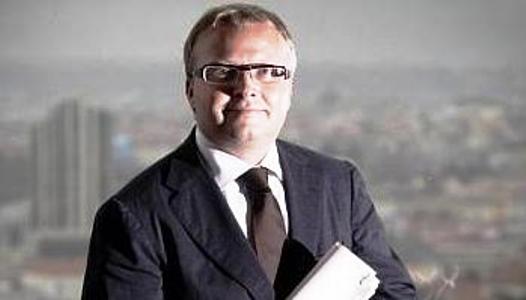 Vermos, VK Technik and Láf Nerez are all former Czech producers or assemblers of solar thermal collectors which started in the 90s and closed down their business over the last three years. In 2008, there were twelve collector manufacturers in the Eastern European country. Seven have disappeared in the meantime or are planning to do so over the coming months, such as Solarplus and Svoboda. These are some of the results of the annual surveys from German market research agency solrico. Most of the collector manufacturers blame the worsening situation on the new national incentive programme Nová Zelená Úsporám. The scheme will most likely not create an additional 70,000 jobs as promised by the former Minister of Environment, Tomáš Chalupa (see photo) – at least not in the solar thermal sector.
Photo: Martin Divíšek/denik.cz

Jiří Vlk, Owner of solar thermal system supplier Vermos, had been in the business of assembling vacuum collectors for nearly twenty years, halting his activities just this autumn. Vlk made clear that the new subsidy scheme had been the major reason for ending his stake in the sector. First of all, there was no sustainable demand on the market: “The calls trigger periods of time during which literally nothing is sold.” The conditions of the programme were so unclear that it had given Vlk “more headaches than benefits”. Second, the Vermos owner pointed to the new product testing requirements which have to be fulfilled before a company can apply for a place on the list of certified suppliers – they were simply too expensive for small companies. Vlk was told by a local authority that one of the reasons for the new testing requirements was to exclude low-quality Chinese collectors. It seems, however, to be no hurdle for large Chinese firms to pay the required test fees.

“From a cost standpoint, it makes more sense to buy a collector from a wholesaler in the Czech Republic than to run your own production,” comments Vladislav Korecky, Owner of solar thermal system supplier and former flat plate collector producer VK Technik. Korecky had been thinking about quitting for the last few years and has now decided to act. The VK Technik owner confirms: “I feel sad about losing the status of a manufacturer. But I just cannot compete with the prices of cheap Chinese collectors on the one hand and big Czech manufacturers on the other.”

His competitor Svoboda is struggling in much the same way. “Large manufacturers can offer better prices and sometimes better service,” Owner Karel Svoboda confirms. Svoboda, who took over the collector production from his father, says: “They often have longer guarantee periods and have more people who can go check the collector quickly in case it needs maintenance or repairs.” Svoboda has only sold from stock this year and did not produce anything, which is why he is seriously considering leaving the industry.

“Quality is something that is no longer needed. The only important keywords for Czech customers are price and discount,” Svoboda regrets. The business man says that as a result of the price war, companies are trying to push manufacturing costs down by every available means. “If that is no longer possible, they will start ordering collector parts or sets from countries with cheaper production.” Companies which focus on quality rather than quantity are not able to compete in the market even if they lower their margins. He explains that material costs for his collector panel, excluding labour hours, are Czech Crown (CZK) 1,000 (EUR 38) more expensive that the wholesale price of big Czech producers.

“This is an opportunity to clean up the market,” Peter Švarc, Sales Manager of AR Solar, disagrees. AR Solar imports heating technology, including solar, from German manufacturer Stiebel Eltron. “Subsidies are good for customers, but they have a negative influence on companies. The market will stabilise, once Nová Zelená Úsporám is over.” Švarc emphasises that companies which are not good enough will not survive: “Today, every second company is selling solar thermal collectors which often have low quality.”

“On the other hand, Chinese imports and the fact that many unqualified firms had offered installations have tarnished the reputation of solar thermal, making people simply not interested in the technology,” Otakar Kocourek, owner of the solar thermal system supplier and former flat plate collector manufacturer Solarplus gives his take on the current situation. His company did not even register with Nová Zelená Úsporám, because he did not see any benefit in the programme. The conditions for solar thermal were published in August 2013 – eight months after the programme had started – and the regulations were very unclear in their intended meaning. People have to prepare the documents with external specialists who have no time and interest in solar thermal, he complains.

For example, collector and tank manufacturer Regulus has solved the problem by hiring a specialist who is taking care of all necessary documentation. This solution, however, is again driving up costs and easier said than done in case of small companies.