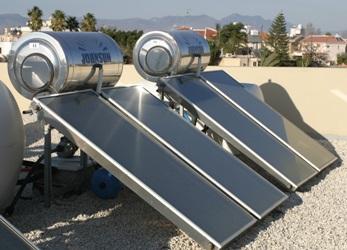 The Cyprus solar thermal market is shifting from “newly built” to “retrofitted” – a trend supported by the subsidy scheme of the Fund for Energy Efficiency and Renewable Energy. This year, the fund run by the Cyprus Institute of Energy (CIE) offered more generous grants for residential solar water heater replacements than it had done in 2011. The 2012 grant scheme ended on 31 October 2012 but a similar scheme is expected for next year, too. The fund received financial support through a levy imposed on the electricity bill. The Ministry of Commerce, Industry and Tourism uses the subsidies to increase the efficiency of solar thermal systems across the country.
Photo: Johnsun Heaters

The industry appreciates the efforts of the government: The sector for newly built homes has decreased a lot since the financial crisis in 2009 and has dragged the local manufacturers down with it. “The majority of the systems we are selling today replace older installations,” Andreas Ioannides, Technical Manager at Johnsun Heaters, confirms. The collector manufacturer based in Nicosia and founded in 1982 produced only one-fourth of the collector area in 2011 (1,000 m²) that it had manufactured in 2010 (4,000 m²). “We were hit twice – first by the slowdown in the national building sector and second by the decrease in our export markets like Spain,” explains Ioannides.

The subsidy scheme financed by the Fund for Energy Efficiency and Renewable Energy granted EUR 350 for the replacement of a complete solar thermal system of different types (low- and high-pressure, pumped or thermosiphon) between January 2012 and 31 October 2012 (find further details in the table below). In case the owner of the system only renewed the collector field, the grant was EUR 175 per collector for any number of panels. According to Ioannides, most solar tanks in Cyprus are made of copper, so in many cases the client just replaced the collector field to increase the efficiency of the system and left the tank in place.

This year’s subsidy conditions look much better than in 2011 when the fund was granting the EUR 350 only for replacing high-pressure, pumped solar thermal systems. Last year, thermosiphon systems received a mere EUR 175. Replacing a collector field was not supported at all.

The following table describes the incentive scheme that was in place until the end of 2013.