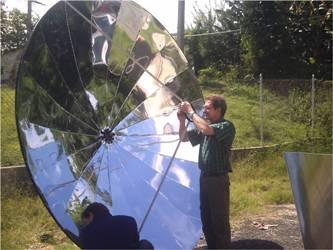 The Cuban Applied Renewable Energy Group, GERA, can look back at 15 years of successful research and development projects. Together with the Faculty of Mechanical Engineering at the Orient University of Santiago de Cuba, GERA has formed a team of specialists from several disciplines, including renewable energy specialists, physicists, mechanical and automation engineers, computer specialists, and architects. The group has been running a solar laboratory and a student exchange programmes with European Universities. The photo shows Jorge Luis Bonzon Henriques, Director of GERA, with one of the solar dishes for solar cooling systems designed by the GERA team.
Photo: Gera

Over the last fifteen years, GERA has completed several development projects, such as solar cooking systems, or process heat applications with dish or parabolic systems, and has evaluated different solar dryers for fruits, plants, beans and vegetables. Most of these projects were initiatives of companies or joint projects together with universities in Europe or Latin America. A brief list of the finished projects can be found below:

GERA is also operating a meteorological station in Santiago de Cuba. The station, which was set up in a joint effort with Aachen University, Germany, has been designed to be self-sufficient, drawing its own current supply from photovoltaic modules and a back-up system. Since 1998, it has been recording all relevant meteorological data, such as global solar radiation, wind speed, wind direction, ambient temperature, relative humidity and atmospheric pressure. The station, which has been damaged by hurricanes each year since its installation, is located in the world’s solar belt (20º 1.8162 N and 75º 48.5267 W).

Over the last years, several students from Germany, Austria, Canada, the Caribbean and African nations have worked at GERA. In addition to a theoretical education, Gera has also trained them in solar prototype design and how to assess this design under real-life conditions. Several European Universities have a student exchange programme with the Orient University of Santiago de Cuba.

This article was written by Christoph Zipko, R&D Project Coordinator at an Austrian collector manufacturer and former technical co-worker in setting up the solar laboratory at GERA.