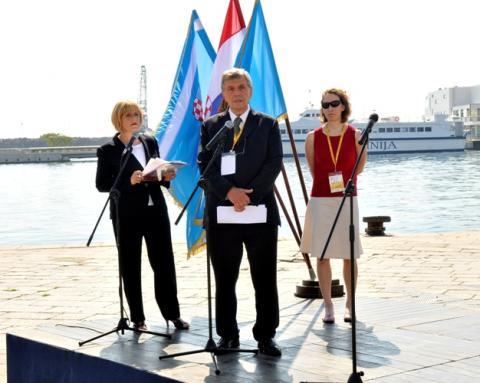 This time, the Eurosun took place in a beautiful coastal town in Croatia, Opatija, in the middle of September 2012. The Eurosun 2012 was already the ninth European conference of the International Solar Energy Society (ISES). It was hosted by the Croatian Solar Energy Association, HSUSE, and the Faculty of Engineering at the University of Rijeka. The photo shows Professor Bernard Franković, Conference Chairman, President of ISES Europe and Professor at the University of Rijeka. The organisers were satisfied with the more than 100 conference participants and the 170 scientific papers presented and published during the event. The Croatian HSUSE was founded in 1975 and combines all local solar-related associations. Its aim is to promote solar energy and other renewable energy sources by cooperating with companies, educational facilities, and biannual congresses.
Photo: HSUSE / University of Rijeka

The speakers at the three-day conference presented research results which had been gathered from all over the world during the last two years. Topics included solar thermal, photovoltaics, heat pumps and combinations of these technologies. In the solar thermal sessions, the experts discussed the benefits and challenges of solar process heat. Among the numerous presenters talking about solar process heat were Elimar Frank, Research Director at the Swiss research institute SPF Rapperswil and the leader of Subtask A of the IEA SHC Task 49, as well as Ulrike Jordan, Professor at the German University of Kassel. Jordan presented the new guidelines for solar process heat in breweries. In spite of all the potential, solar process heat is still in its infancy. According to Frank, one of the main barriers is the effort and money that has to be spent on successfully integrating solar heat into an existing production process. Until now, many plans for solar heat installations have not even passed the first assessment by the industry’s decision-makers, because the economic and technological key figures of this type of solar installation are difficult to derive. For example: most, if not all, of these cases have to also include an analysis of their heat recovery and process optimisation potential.

“More experience-based design tools are necessary,” Frank says. As an important side note, he adds that guidelines are now available for either a selection of processes or for entire industry sectors. One example is the guideline for breweries, which was drafted by the University of Kassel and has been presented in the context of Task 49. The research group within the Solar Heating and Cooling Programme (SHC) of the International Energy Agency (IEA) was established in early 2012 and will finish their work at the end of 2015.
“There are not that many planners who can do the job well – including feasibility study and installation design,” Bastian Schmitt, researcher at the University of Kassel and author of the brewery guidelines, explains. “The guideline and the study we made respond to this problem and will hopefully offer energy managers or planners most of the information they will need to handle a request from a brewery and to successfully complete a project.”

The main obstacle that his team had been confronted with was the diversity in the brewing sector. For example, there are more than 1,300 breweries in Germany. Less than 5% of these breweries account for almost 75% of the total amount of beer produced in Germany. Especially smaller breweries show a large variation in terms of product range and production times. Additionally, different installations can be used for one process. “Indeed, it was hard to provide information which would be valid for several types of breweries,” concludes Schmitt. All of these differences cannot be illustrated and explained within one guideline alone, as this would make the guideline highly confusing. Instead, a so-called sector concept on using solar heat in breweries was published. The sector concepts include additional practical examples of different brewery processes that cannot be found in the guideline itself. Both documents are attached but only available in German.

Regarding collector development, Task 49 is currently investigating the durability of absorber coatings which could be used for receiver tubes and higher temperatures by means of accelerated ageing tests at the Swiss research institute SPF Rapperswil. According to Frank, Task 49 plans to publish a report called “General Requirements of Process Heat Collectors” in November 2012. The director of SPF research also points out that a number of new medium-temperature collectors are entering the market and that more and more demonstration projects are up and running.