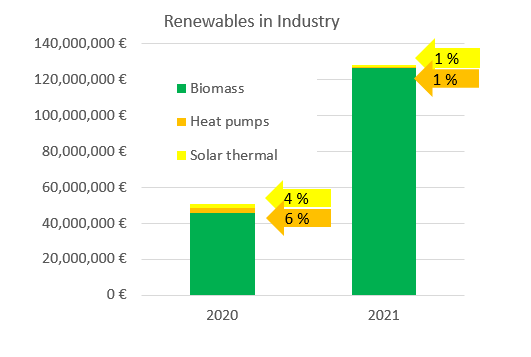 Demand for subsidised renewable industrial heat in Germany has been growing significantly. The German subsidy scheme Energy Efficiency in Industry – Section 2 spent EUR 128 million in 2021, which was two and a half times more than the previous year’s EUR 50 million. In both years demand was dominated by biomass heating plants. In 2020 around 90 % was spent on biomass boilers and in 2021 this was even 98 %. Solar heat and heat pumps – the other two eligible technologies in the scheme – have profited only a little (see chart above). The chart is based on figures provided by the Federal Office for Economic Affairs and Export Control (BAFA) – one of the administrators of the subsidy scheme for Energy Efficiency in Industry.
Source: BAFA

This grant programme accepts applications from industry and trade for the purchase of either a biomass boiler, a heat pump or a solar thermal system to reduce emissions when generating heat. Depending on the size of the investor, the programme grants 45 % to 55 % of the investments for the renewable heating assets, including installation.

The Energy Efficiency in Industry programme evolved from the merger of several industry-related subsidy schemes at the beginning of 2019. This merger included the long-term solar industrial heat scheme which started already in 2013 and was part of the Market Rebate Programme.

Solar heat is a niche technology despite good funding

What is surprising is that against the trend of rising energy prices in 2021 solar industrial heat (SHIP) applications were down from 37 in 2020 to 17 in 2021. “Despite the good funding conditions, solar heating plants in industry are still a niche market with fluctuating implementation figures,” said Felix Pag, Head of the Process Heat Working Group at the University of Kassel, who analysed the impact of the subsidy scheme over several years. Pag also observed that the proportion of vacuum tubes has increased in recent years.

The researcher listed a number of reasons that are responsible for hindering the expansion of the solar industrial heat sector in Germany. First of all, there is a lack of a supply chain. “Only a small number of planners or solar thermal system suppliers focus on industrial clients as they are a relatively demanding customer group. In addition, gas prices have been relatively low in recent years, which has not put pressure on the industry to modernise its heat supply”.

With respect to the market development of biomass boilers, Pag warned: “Biomass is a simple solution to reduce CO2-emissions for industry, but it is far too valuable to simply burn it. A biomass boiler should be combined with solar collectors or heat pumps wherever possible.” 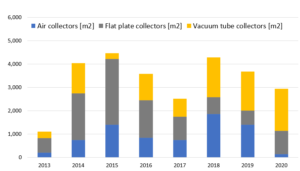 Solarthermalworld.org contacted the Economy Ministry, which is in charge of the subsidy scheme, for an evaluation. The Press Department of the ministry confirmed that the expectations were reached and the available budget was mostly used and even extended in 2021. Section 2 of the Energy Efficiency in Industry scheme had a budget of EUR 58 million in 2020, of which EUR 50 million were spent. In 2021 the ministry planned to spend EUR 79 million, which was then exceeded by the real expenditure of EUR 128 million.

When asked for the reasons why solar heat applications have been declining over the years, the Press Department claimed that the subsidised solar collector area between 2019 and 2020 had increased, which is in contrast to the figures provided annually by BAFA. It could be that the evaluation of the subsidy scheme is currently not adequately possible because of changing staff in the Economy Ministry after the new German government came into power in December 2021.

Organisations mentioned in this news article:
Energy Efficiency and Renewables at BAFA
Subsidy scheme Energy Efficiency in Industry (in German)
Department Solar and Systems Engineering at the University of Kassel
Infoportal about solar process heat in German