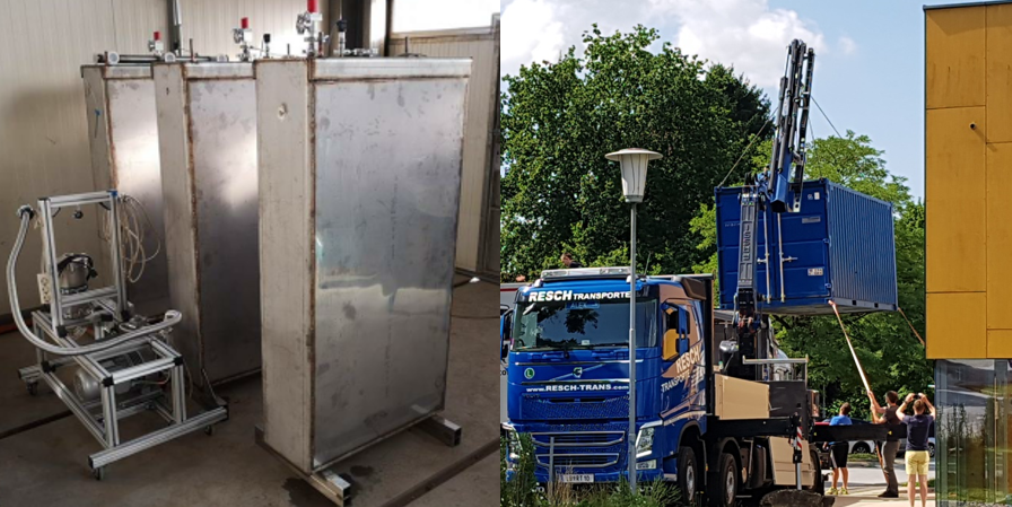 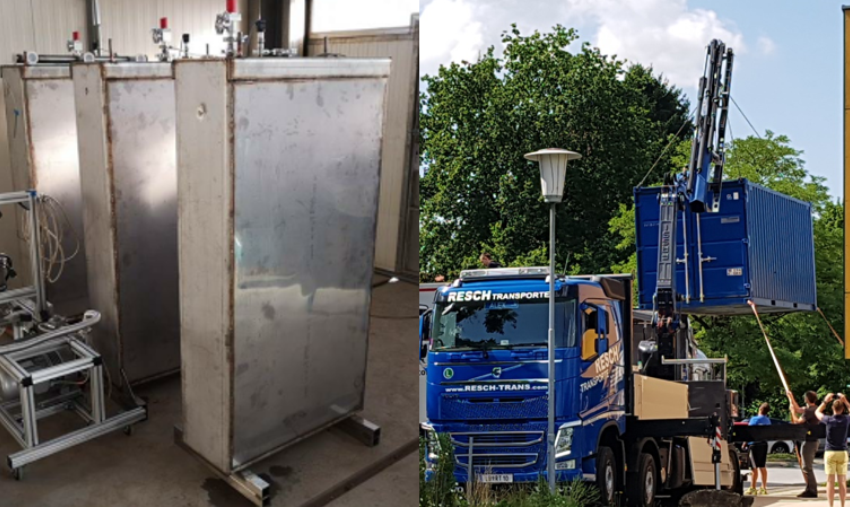 A compact thermochemical seasonal storage system put up at a demonstration site in Warsaw, Poland, is working as expected. The prototype, developed and tested as part of an EU research project called CREATE, consists of three evacuated modules filled with 400 litres of salt each to store heat with no heat loss by dehydrating the salt (see the photo on the left). The container that houses the ready-to-connect storage system was loaded onto a truck at Austrian-based institute AEE INTEC in the summer of 2019 (see the photo on the right) and was integrated into the heating system at the demonstration site in Poland the following month.
Photo: AEE INTEC
“During CREATE, we have achieved several milestones in identifying storage materials, improving components and developing testing procedures that simulate real-life conditions. This makes the project particularly valuable to our international research platform Task 58,” explained Wim van Helden. He co-chairs the platform, which was named Material and Component Development for Thermal Energy Storage and is being supported by the IEA Solar Heating and Cooling Programme.
Harmless salt stores solar heat
Granular potassium carbonate (K2CO3) was identified as a cost-effective, suitable thermochemical material (TCM) that could be charged with solar heat at temperatures above 65 °C. The salt is not a health hazard – it is even used in the food industry – and it is not very corrosive to metal parts either. In addition, the salt granules have shown no signs of degradation after multiple charge-discharge cycles to simulate the 20-year lifetime of seasonal storage.

Assembling the prototype: The finned heat exchanger is embedded into the steel-walled container and later filled with salt granules.
Photo: AEE INTEC
Space-optimised seasonal salt storage
Another innovative feature is the new prismatic shape of the storage container, which decreases the volume by over 20 % compared to conventional cylindrical water tanks with the same capacity. The module includes a finned heat exchanger that is used as a fixed bed reactor to transfer heat from the storage material to the heat distribution system and vice versa. The exchanger is also used as a structural element to keep wall thickness to a minimum despite the vacuum pressure inside the container. “Thermochemical storage saves space as well, as it requires a much thinner insulation layer. This is because thermal energy is stored in a chemical reaction, not in the form of latent heat,” explained Samuel Knabl, a researcher with AEE INTEC and the head of the CREATE project. The three salt-filled prototype modules installed in Poland were evacuated at AEE INTEC after assembly, and the vacuum has remained stable during the first few months of testing. Based on the new design approach, the steel containers are hermetically sealed during manufacture to guarantee a stable vacuum and prevent leakage over the lifetime of the system.

Schematic diagram of the Warsaw plant: The components inside the red line were pre-installed in the container delivered by AEE INTEC. Those inside the blue line make up the current heating system at the orphanage and run on both solar and gas.
Images: AEE INTEC
The overall objective of task 58 was to improve compact thermal energy storage systems for a predefined application, as performance depends significantly on individual operating conditions. In the case of CREATE, the aim was to demonstrate the feasibility of running a seasonal storage system in an existing residential building. A suitable method for improving the integration of this sort of system are hardware-in-the-loop (HiL) experiments, which AEE INTEC conducted on the prototype modules before delivering the container to Poland. HiL means that the energy harvested by the solar collectors, as well as hot water and space heating demand, was simulated to test what will happen to the long-term storage tank when it is charged/discharged under conditions resembling those at the future demonstration site.
Asked about the integration of the seasonal heat storage unit into the existing heating system, Knapp explained: “The aim is to store excess solar heat generated by the collectors in summer in a 2 m3 short-term buffer tank big enough to charge one of the steel modules filled with 400 litres of salt granules.” Charging a module took about 24 hours in Warsaw, as long as sufficient heat energy was available.
In autumn, when heat is required from the sorption storage, a borehole is used to evaporate the water in the evaporator unit. Since the system is run in a vacuum, outside temperatures down to below 10 °C can be used for the process. The low pressure in the cold, dry storage material causes water vapour to enter the storage as soon as the vacuum valve is opened. The vapour is then adsorbed on to the surface of the sorption material. This discharge process is called hydration. It produces heat at domestic hot water temperature level and this heat is subsequently stored in the buffer tank.
The three 400-litre salt-filled containers installed in Warsaw feature a modular design and have a total storage capacity of about 182 kWh. This is only a fraction of what is needed to meet heating demand from the multifamily building at the demonstration site, so the system went through just one charge-discharge cycle during the first month of testing. Knabl said the modular design of the storage system means that a larger number of storage modules would increase the solar fraction and lead to multiple cycles throughout the year.
Task 58 was a collaborative three-year effort between thermal energy storage researchers working in several national projects around the world. It ended early this year. You can find more news reports on the achievements of this research group on solarthermalworld.org:
January 2020: Compact thermal energy storage: research in cycles
January 2020: In search of cost-effective, advanced PCMs
October 2019: Encouraging faster materials development for compact storage
October 2018: Online database on advanced PCMs
October 2018: “Excellent material for sorption-based solar energy storage”
July 2017: IEA SHC Task 58: “We will need new and innovate designs for heat and mass exchangers”
Organisations mentioned in this article:
http://task58.iea-shc.org/subtasks
http://www.iea-shc.org
https://www.aee-intec.at/
http://www.createproject.eu/