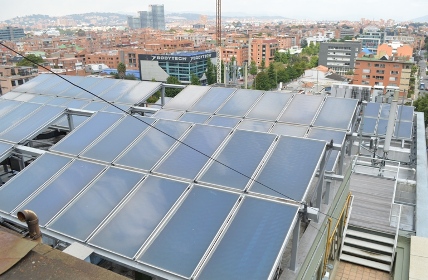 A new law has just provided the framework to offer renewable tax incentives in Colombia. The law will now be followed by a decree, which is expected to be finalised within less than a year and will specify the objectives and support measures for different renewable energy technologies. Still, some companies are currently seeing the market grow even without any incentives in place, especially in the hotel and healthcare sector. The photo shows a field of 150 collectors on the roof of the Hotel Plaza in Bogotá. The system covers more than 40 % of the hotel’s hot water demand.
Photo: GIE
Despite its abundant solar resources (each year between 1,600 and 2,200 kWh/m²), Colombia has not yet been an international reference when it comes to supporting and promoting solar energy. The country of 46 million in the north of South America generates 60 % of its electricity by large hydroelectric plants and 30 % by using fossil fuels. Renewable energy sources, such as wind or solar, constitute a negligible share in today’s energy mix. Fortunately, the government seems to be taking some steps to address the green energy deficit.
Law as framework to promote renewable energies
On 13 May, the government of Juan Manuel Santos approved Law 1715, which aims to “Integrate Non-Conventional Renewable Energy Sources into the National Energy System”. The law is thought to provide the framework for the promotion of different renewable energy sources, such as wind, biomass, small hydro, geothermal, solar photovoltaic and solar thermal. In addition to singling out fiscal incentives as the main support measure, it also states that a separate decree will specify the target for each technology and the general conditions for incentives.
Jorge Osuna, Managing Director of Gestión Integral Energética (GIE), one of the main developers and installers of solar technology in Colombia, said that the new law was a promising step in the right direction. “However, it still needs to be regulated in detail. We expect the final decree to be approved in less than a year.” The final implementation decree would include mainly import tax reductions, VAT refunds and income tax relief for investments in technologies such as solar thermal. No direct subsidies or feed-in tariffs would be expected.
Growing demand in hotel and healthcare sector
Whatever its implementation will look like, the new law may give solar thermal technology an additional impetus. “Currently, there is no public incentive for solar thermal in Colombia,” Osuna, whose company imports collectors from Austrian supplier Sonnenkraft, said. Despite the lack of support, the market seems to be growing, in particular in the hotel and healthcare sector. Actually, GIE has just recently installed a 150-collector field at Bogotá’s Hotel Plaza. “The system saves up to 40 % of domestic hot water consumption. The payback period for that system will be between 5 and 6 years.”
Hard work to convince clients to invest in relatively new technology
Osuna explained that most solar thermal end consumers did not invest their own money, but preferred to use a loan and pay it back with the money they saved after the system was operational. “By taking out a loan, the payback period goes up to 6 years,” the Managing Director said. If the end consumer were to pay in advance with their own savings, payback periods would lower to 3 or 4 years. “It is not an easy task in Columbia to convince clients to invest in a relatively new technology. We have to work hard to educate end costumers,” Osuna added.
So far, GIE has installed around 2,000 m² of solar thermal systems across the country. There have not been any official statistics on the country’s currently installed solar capacity. But according to Osuna, demand was growing. GIE expects to set up three new systems at two hotels in Cartagena and another one in Bogotá this year. “We hope the new law will make things easier for everybody,” Osuna said.
More information:
http://www.gie.co
Law 1715: http://wsp.presidencia.gov.co/Normativa/Leyes/Documents/LEY%201715%20DEL%2013%20DE%20MAYO%20DE%202014.pdf