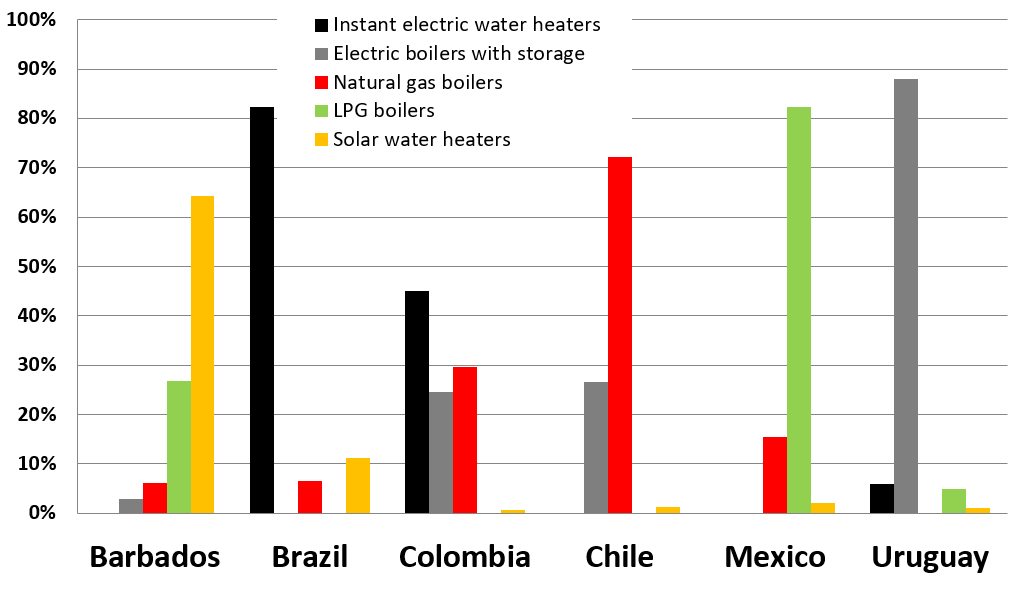 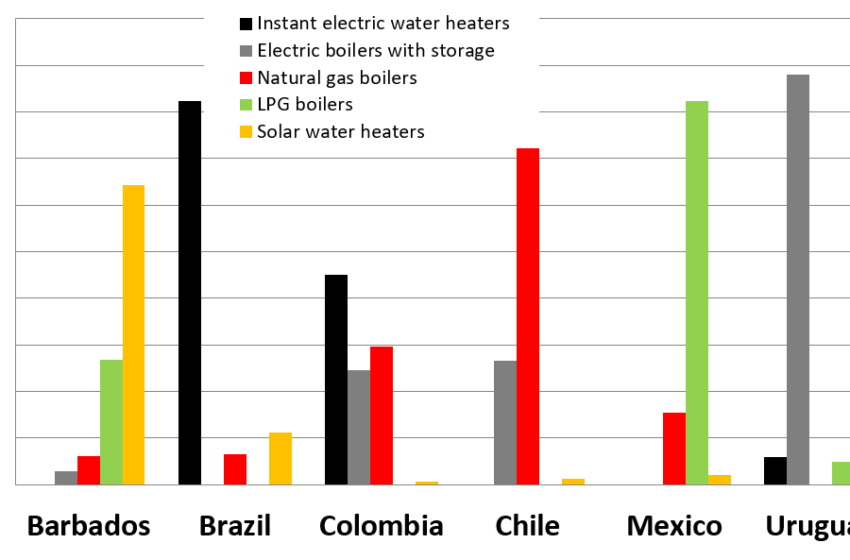 Fundación Bariloche, a private-sector research institute based in Argentina, has recently published a report on the differences between the solar thermal markets in Barbados, Brazil, Chile, Colombia, Mexico and Uruguay. The authors of the study take a look at key factors for growth, such as access to and use of hot water systems, incentive programmes, quality standards and certification schemes (for more information, see the attached document in Spanish). As shown in the chart at the top of this news piece, the number of conventional and solar water heaters varies greatly from country to country.
Source: Fundación Bariloche
The bars in the diagram indicate that the most popular technology in Barbados is solar water heating (yellow). In Brazil and Colombia, the best-selling one is instant electric water heating, for example, in the form of electric showers without storage (black). Conversely, Uruguay’s most popular devices are electric and include storage units (grey). The majority of systems sold in Chile and Mexico are powered by natural gas (red) and LPG (green), respectively.
While the residential sector accounts for about 18 % of final energy consumption, the percentage of hot water and water heaters is different for each country and region. For example, the temperature  in the northern part of Brazil averages 20 °C to 28 °C, so that 90 % of all households do not even heat up water at all. In the south, temperatures are usually between 10 °C and 20 °C, which means that 98 % of all homes have hot water systems installed. Overall, Uruguay has the most water heaters (91 %), followed by Chile (86 %), Brazil (75 %), Colombia (70 %), Barbados (48 %) and Mexico (47 %).
Latin America contributes 2.5 % to solar thermal sales globally. Market conditions and growth  differ throughout. The two largest markets are Brazil, which has a total installed collector area of 13 million m2, and Mexico, where the number is 3 million m2. In Barbados, the total stands at 200,000 m2 and the ratio of 0.7 m2 of solar water heaters (SWH) per head is the highest among all six. In Chile, the total collector area amounts to 259,000 m2, and Uruguay shows only 52,000 m2, at 0.1 m2 per capita.
However, the most popular technology for water heating in these countries is not necessarily the most economical. The table below shows the energy costs in each market.

Cost of energy for residential purposes. The figures marked in red indicate that the lowest energy price does not correspond to the most popular heating technology.
Source: Fundación Bariloche

Payback periods at an average investment of USD 1,500 for a solar water heater, broken down by country and compared to conventional water heating technologies. The lifetime was assumed to be 15 years.
Source: Fundación Bariloche
Quality assurance and certification: room for improvement
Despite the availability of technical standards, for example, EN-12975 and EN-12976, in each of the six countries, there are large differences between certification schemes and quality infrastructures, which include certification bodies, laboratories and test institutes. The degree of implementation also varies: In Brazil, businesses require local certification from an accredited body before they are able to sell products. In Mexico, Chile and Uruguay, local certification is only needed for companies receiving money from a national incentive programme. Mexico has several certification bodies but few, non-accredited, test labs. These labs are being supervised by the certification bodies regarding their compliance with ISO 17025, and tests are conducted according to DTESTV. In Chile, one lab has been accredited for testing systems which have no certification to indicate their country of origin. In Uruguay, there are two non-accredited test labs. Colombia and Barbados have neither certification schemes nor testing facilities.
In the chapter Recommendations, the authors write that local test facilities are relevant if there is a mix of locally produced and imported systems, while international certification, for example, Solar Keymark from Europe or SRCC from the USA, could be good enough if the market is mainly made up of imported systems.