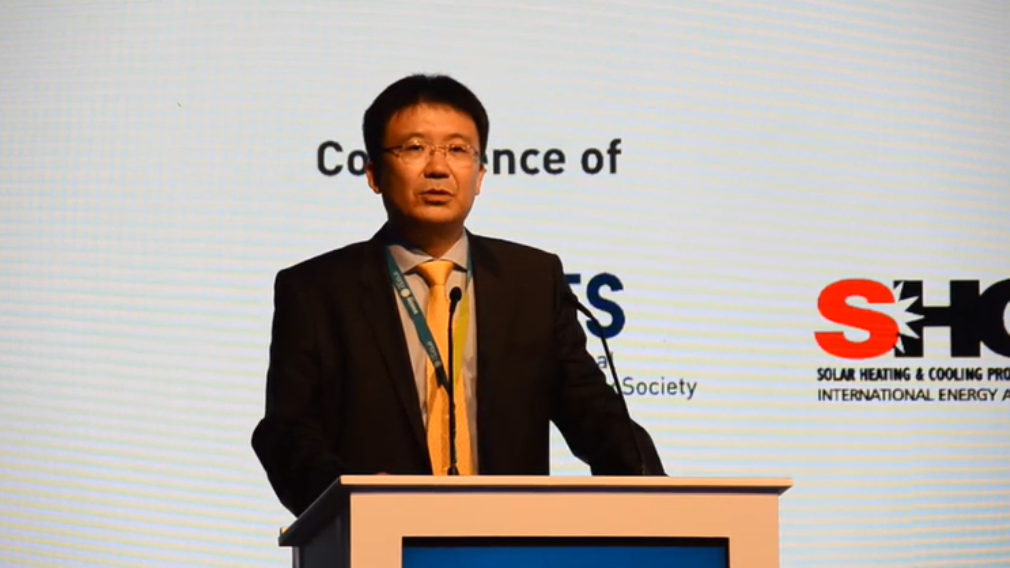 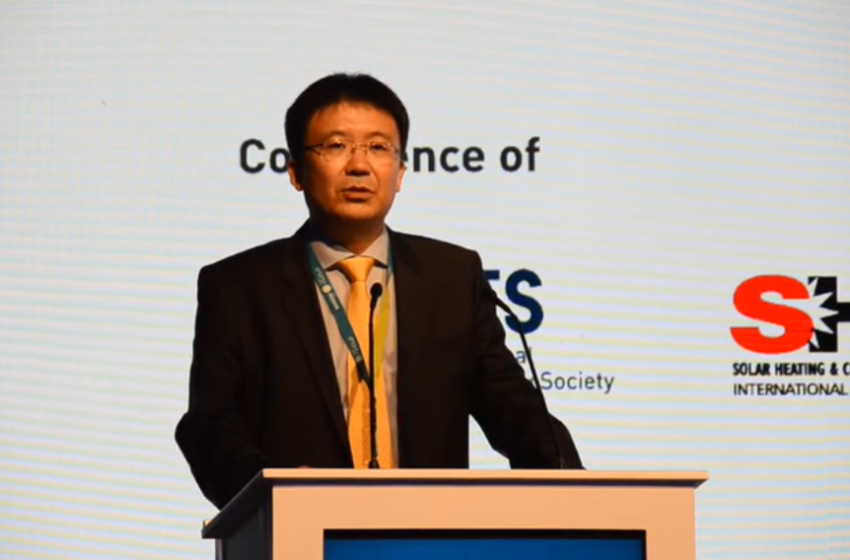 The Chinese solar thermal market shows a varied picture of demand. While subsectors such as solar space heating are booming, total market volume continues to decline. Solarthermalworld.org spoke with two professors at the China Academy of Building Research, He Tao (see above) and Ruicheng Zheng (see below), about the drivers and barriers behind this trend. Professor Tao, who has served as Vice Chair and China representative on the IEA Solar Heating and Cooling Programme’s Executive Committee since 2012, joined CABR’s Faculty of Heating, Ventilation and Air Conditioning in 2010. His colleague, Professor Zheng, who is also Chief Engineer at the National Centre for Quality Supervision and Testing of Solar Heating Systems in Beijing, began working for CABR’s Faculty of Energy Efficiency and Solar Application in Buildings in 2001.
Photo: IEA SHC

Professor Zheng during her presentation at an IEA SHC Solar Academy workshop in China in 2018 Photo: Task 55
The solar space heating market experienced a boom in China in 2020, with the addition of 2.5 million m2 of newly installed collector area. What were the drivers behind this high demand?
CABR: The main driver was the Chinese target for decarbonisation. The country aims to hit peak emissions before 2030 and achieve carbon neutrality by 2060, President Xi Jinping announced last September. Many local governments have policies in place for clean space heating, which promotes growth in the solar space heating market as well.
Another driver was the objective to improve low-income groups’ living conditions in western areas such as Tibet, where space heating was unavailable in the past. Tibet has the best solar resources, enough space for installations and a small number of inhabitants, so it is well suited for the construction of large solar space heating systems. Some of the recently commissioned solar district heating plants with more than 10,000 m2 of collector area and seasonal storage meet 100 % of the energy demand during the heating season, which lasts for about 8 months in Tibet.
Will demand for space heating continue to be that high in the years to come?
CABR: As two of China’s long-term objectives are decarbonisation and an improvement in living standards, we think demand may remain high in the years to come.
China’s total annual solar thermal market volume decreased again in 2020, which means it has declined every year since 2013. What are the reasons for this decline?
CABR: The main reason for this is a decrease in the sales of domestic solar hot water systems. China’s main solar thermal submarket has been small residential solar hot water systems – one unit per flat. But that changed around 2010, when high-rise residential buildings became the norm in cities and the installation and operation of individual solar water heater units grew more complex.
The availability of solar-heated water depends on weather conditions, whereas hot water from electric and gas boilers is available at any time. As family incomes have increased in small and midsize cities – the main market for domestic solar water heaters in the past – consumers now prefer electric or gas water heaters and care less about how much they have to pay in electricity costs for hot water. Plus, in the countryside, a VAT reduction subsidised solar water heater purchases over several years so that the market is relatively saturated.

The Chinese market is transitioning away from selling individual rooftop solar water heaters installed on midsize multi-family buildings in smaller towns (left) towards offering large solar district heating systems, such as those with more than 10,000 m2 put up in multiple villages in Tibet. Photos: solrico/Solareast Group
The IEA SHC Programme will soon launch a new task titled Smart Solar Water Heating for 2030. What role can China play in this new task as the world’s largest market for thermosiphon systems?
CABR: China has ample manufacturing capacity for solar thermosiphon systems, so it can assume a key role in developing new products and provide technical support for this new IEA SHC task. He Tao and Dr Robert Taylor from Australia – with much support from Australian SHC Exco member Ken Guthrie – will jointly operate the task. More than 50 experts from 20 countries and organisations participated in the task’s online definition workshop on 23 and 24 September. An important objective of the task is to develop ‘smart’ thermosiphon and PV-driven hot water systems, which may result in completely new types of systems with longer lifetimes and higher efficiencies.
The IEA SHC Programme also runs a research platform about Solar Process Heat. China has held the top spot for new industrial solar heat plants in 2020, adding 26 new systems. How do you think the market for industrial solar heat will develop in China?
CABR: Industrial solar heat will see notable growth in China, as we have a number of technology providers which specialise in this sort of application, Linuo Paradigma and Himin Solar among them. Himin has installed one of the country’s largest industrial solar heat systems with 9,903 m² of vacuum tube collector area for a textile factory owned by the Ruyi Group in Shandong province. The system was commissioned in October 2015. Read this news.
Interview conducted by Bärbel Epp
Organisations mentioned in this article:
IEA SHC Programme: https://www.iea-shc.org/
China Academy of Building Research: http://www.cabr.com.cn/
IEA SHC Task Solar Process Heat: https://task64.iea-shc.org/
Linuo Paradigma: https://linuo-paradigma.coowor.com/
Himin Solar: http://himinsun.com/