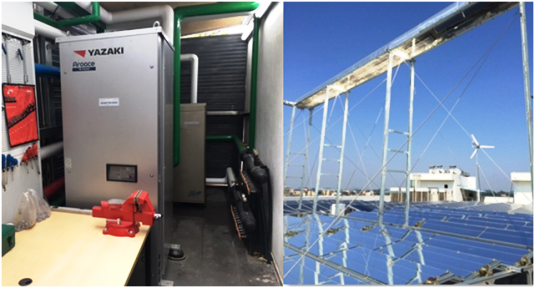 Two larger solar thermal cooling installations were put into operation in China in 2016. One of them was a 23-kW Yazaki absorption system (left photo) and one a new developed 50-kW variable-effect absorption chiller driven by a Fresnel collector (right). Solarthermalworld.org spoke with Professor Yanjun Dai of Shanghai Jiao Tong University (SJTU) about the market and technological advances of solar cooling in China.
Photos: SJTU

Solarthermalworld: Have you noticed an increase in demand for solar thermal cooling in China last year?
Dai: In 2016, the solar water heating market witnessed a significant decline, mainly because of shrinking demand for solar domestic hot water. Demand for solar thermal cooling primarily comes from hot-climate regions. Regarding applications for solar thermal cooling, we cannot really talk about a clear-cut increase or decrease, as there has been no well-developed market yet because of high initial costs and other issues. But there have been advancements in technology. There are air-cooled absorption chillers with capacities of 6 to 15 kW. These vapour-compression refrigeration units can be integrated into residential systems combining solar heating and cooling to ensure temperatures remain at acceptable levels. There is also the new variable-effect absorption chiller, which can be operated at between 80 and 180 ℃. This chiller developed by SJTU and manufactured by Chinese-based Shandong Luxi uses lithium bromide as the absorbent and water as the refrigerant. The water is boiled in a vacuum to absorb heat and allow for cooling at 7 to 12 °C. The cooling unit can switch between two independent refrigeration cycles (single effect and double effect), depending on the operation temperature of the solar collector, and improve solar cooling efficiency to a considerable degree.
Solarthermalworld.org: What future opportunities do you see for solar thermal cooling in China?
Dai: There is still great market potential and some businesses have stepped up their efforts to increase sales. The other market driver is the strong growth of the clean-energy heating market in 2016, which will be followed by a considerable rise in the share of solar space heating over the coming years. The summer overheat problem will create big opportunities for solar thermal cooling. We expect the market to grow together with the one of solar heating, as soon as initial costs can be reduced successfully.
Solarthermalworld.org: Which showcase projects in solar cooling came online last year?
Dai: Two new major solar thermal cooling plants went online in 2016. One project in a public building in Guangzhou included a 50-kW variable-effect LiBr-H2O chiller as described above and used a linear Fresnel collector made in China. We have tested and monitored the system thoroughly and the results show that the efficiency of the linear Fresnel collector is around 69 % and the operating temperature is as high as 147 ℃. The COP of the chiller ranges between 0.84 and 1.05 depending on the temperature output of the solar collector. The cooling plant can convert solar radiation into cooling energy by 0.41 to 0.53 under the given conditions.

Solar-cooled office building in Nanhui, Shanghai
Photos: SJTU
Dai: The second major plant was installed in a private-sector office building in Nanhui, Shanghai. It consists of a 200 m² flat plate collector field installed on the roof of the building and supplies heat to a single-effect 23-kW absorption chiller by Japanese manufacturer Yazaki. The system is a hybrid solution combining a ground-source heat pump and a collector field. Solar thermal cooling is given priority; the heat pump is only used when there is not enough solar heat available.
Solarthermalworld: Do you see solar thermal sorption cooling and PV-driven cooling based on conventional chillers competing for attention on the market?
Dai: Yes, I do. PV modules have become very cheap and PV cooling more competitive. PV-based cooling is also quite simple compared to solar thermal cooling technology. There are no water leaks or thermal insulation to consider, maintenance costs are low, and so on. Gree, one of the biggest suppliers of air conditioning systems in China, has installed hundreds of PV-driven cooling kits, mainly abroad, but in China as well.
This interview was conducted by Bärbel Epp.