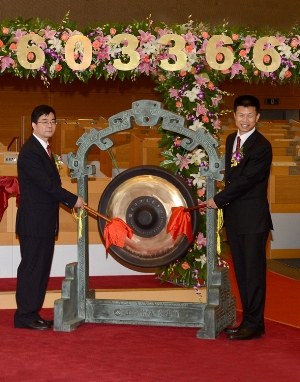 After more than a year of preparation, solar thermal heating manufacturer Sunrain Solar Energy has finally gone public on 21 May 2012. At exactly 9 am, company founder and President Xinjian Xu (right) hit the big gong together with the mayor of Lianyungang (Jiangsu province) where Sunrain´s headquarters are located. Under order code 603366, a total number of 80 million stocks were offered on the Main Board of the Shanghai Stock Exchange at a price of RMB 21.50, with a maximum order quantity of 80,000 stocks.
Photo: Sunrain

The company that was founded in 1989 runs several factories and is present throughout the entire production chain, from raw glass tubing to vacuum tubes, tanks, flat plate collectors and complete solar water heater kits. All in all, the Sunrain Group produced 29.8 million vacuum tubes in 2010, which corresponds to a vacuum tube collector area of 4.68 million m².

At the end of 2011, Sunrain employed 5,298 people, of which 2,003 are sales representatives and 1,914 are working in production. The group has set up a professional and highly efficient sales network, including around 3,000 dealers which have at least one distributor with a solar store covering 31 provinces all around the country.

Sunrain is the first “solar thermal only” company in China which succeeded in becoming listed on the stock market. According to Chinese market research company Sun´s Vision, there are five companies – Sangle, Sunshore, Himin, Sunrain and Fivestar – which are planning to enter the stock market. “It, however, is very difficult to get government approval if you are only producing and supplying solar water heaters,” Hongzhi Cheng, Head of the Sun´s Vision, explained in an interview with solarthermalworld.org (see http://www.solarthermalworld.org/node/3372). ” Sunrain succeeded: This February, the China Securities Regulatory Commission approved the company’s application to be listed on the Shanghai Stock Exchange.

According to Sunrain’s profile, which was published in February 2011, the group was able to double its turnover between 2009 (RMB 1.54 billion) and 2011 (RMB 3.1 billion). The second figure corresponds to a turnover of EUR 378 million dedicated exclusively to solar water heater technology. In comparison: The renewable energy section of Bosch Thermotechnik – Europe’s largest manufacturer of heating boilers and renewable heating solutions – claimed total sales of EUR 465 million during the same year.

In 2009, at the company’s 10th anniversary, Sunrain stated its vision for the next five years, called 533100. Each number stands for one target the company group wants to achieve. In 5 years, it wants to directly employ 30,000 people, offer 300,000 job opportunities across the value chain, and triple its turnover to RMB 10 billion.