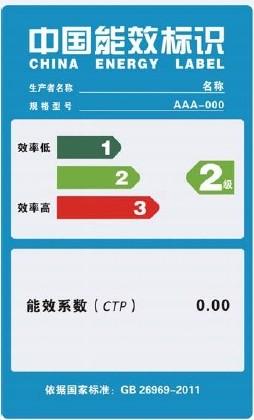 The Chinese government is taking further steps to consolidate the market and improve quality. The National Development and Reform Commission (NDRC) and China’s Ministry of Finance have launched a new initiative to support the distribution of high-efficiency solar water heaters (SWH). Since 1 June 2012, SWH with sizes between 80 and 600 litres have been subsidised at different rates, which vary between Renminbi (RMB) 100 and 550 (see the table below). Eligible systems must fulfil level 1 or 2 of the new China Energy Label (see figure). The subsidy scheme is part of a promotion campaign for “energy-saving products”, which also includes other renewable technologies, such as small wind mills or photovoltaic generators. It will run for one year until 31 May 2013.

This financial scheme follows the Chinese rebate programme for appliances in rural areas, which reduced the price of solar water heaters by 13 % over the last two years. Most of the regions and rural cities have already stopped this programme, which started in 2010. The government’s requirements for the subsidised products, as well as for the supply of the solar water heater are listed in the following:

The subsidy scheme differentiates between compact solar water heaters, in which the water-filled tubes are linked directly to the tank in one unit, and split solar water heaters. The latter are mostly indirect, pressurised systems, in which tank and collector are set up apart from each other. The following table illustrates the level of subsidies.

How will this support policy affect the industry? Similar to the former rural appliances subsidy programme, this new scheme could also increase consumer awareness regarding product quality and the branding of certain companies. As a consequence, the market “will be more and more concentrated around those big companies which have the technology and quality advantages,” analyses Harlim Zhao, Export Manager of vacuum tube collector manufacturer Huayang. On the other hand, the government policy to tax the property of the second and third apartment which is not in one’s own use could continue to hold back the housing sector. The organisation German Trade and Invest states that the private housing sector grew by “only” 13% in 2011, whereas a year before, growth was still at 40 %. So, the slowdown in the building sector will most likely be much stronger in 2012 and 2013 – a slowdown which cannot be offset by the government’s subsidy schemes.

More information in Chinese can be found on the official website of the Ministry of Finance and the NDRC. On 4 June, a document entitled “Support for energy-saving hot water production systems” was published under the following link: 219.239.33.59/sFileShow1.jsp?index=448. The guideline includes three annexes, of which the second is relevant to solar water heaters. It can be accessed under the following link: http://219.239.33.59/index.jsp.