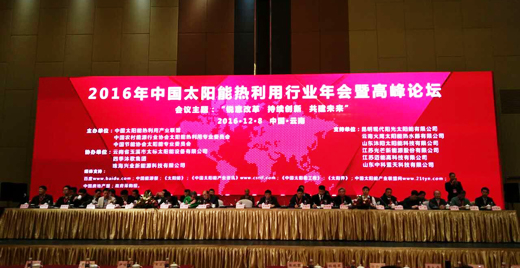 Two large industry events in China over the last months have shown that there is great demand for discussion regarding the transformation of the domestic solar heating and cooling market. The Green Business Forum attracted around 1,000 solar thermal stakeholders to Dezhou in Shandong province from 22 to 25 September, and several hundred industry representatives took part in the annual assembly of the Chinese Solar Thermal Industry Federation (CSTIF) from 7 to 9 December in Kunming, Yunnan province (see photo). According to the latest CSTIF figures, the solar thermal market experienced a sharp 9 % decline last year from 43.5 million m² to 39.5 million m² (30.5 to 27.7 GWth), which reduced it to 60 % of the size it had had in the peak year of 2013.
Photo: CSTIF
“The great efforts by the industry to open up new applications, such as space heating, industrial process heat and space cooling, are starting to bear fruit,” confirmed Hongzhi Cheng, Head of Sun’s Vision, who analysed market development on behalf of CSTIF. After -17 % in 2015 and -18 % in 2014, the downward spiral in the Chinese market slowed last year. Cheng, whose company Sun’s Vision organised the Green Business Forum in September 2016, said that a professional and comprehensive presentation of products and services was even more important when addressing commercial clients.
2016 had been a symbolic year, as it was the first in the 13th Five-Year Plan (2016 to 2020), He Tao, Professor at the China Academy of Building Research, emphasised in his presentation during the Green Expo Forum in Doha, Qatar, in December. Tao´s speech is available as a video on the IEA Solar Heating and Cooling website (http://www.iea-shc.org/videos).
The draft of the most recent Five-Year Plan issued by the National Energy Bureau targets a total installed solar thermal capacity of 0.8 billion m² by the end of 2020, which is almost double the area that had been installed at the end of 2015 (0.442 billion m²).
Tao went on to name some lighthouse projects which confirmed the trend toward large commercial applications:
Despite the promising case studies listed above, Tao advised caution, mentioning major challenges for the solar thermal industry: “Nothing has been done for SHCs after the draft of the most recent Five-Year Plan was published, but there have been several new policies for PV and concentrating solar power (CSP).” Another big step back was the central government’s halt of the Renewable Energy Demonstration Cities Programme. Between 2009 and 2011, it had provided state funding to support renewable energy deployment in 72 cities and 148 counties. The third threat was the government’s power-to-heat policy issued for those parts of China in which the public grid’s renewable electricity share has reached around 40 %, which might also restrict opportunities for solar heating and cooling.
Websites of organisations mentioned in this article:
Annual CSTIF assembly (in Chinese): http://www.cstif.com/html/newshow32904.html
China Academy of Building Research: http://www.cabr.com.cn/engweb/index.htm
Chinese Solar Thermal Industry Federation: http://www.CSTIF.com , http://www.21tyn.com.
Green Expo Forum: http://www.gef.qa/; http://www.iea-shc.org/videos