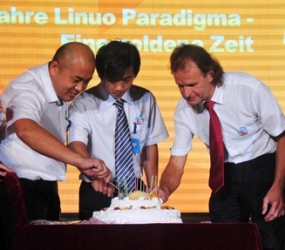 At the beginning of July, Shandong Linuo Paradigma Co. Ltd celebrated ten “golden years” of a successful Chinese-German partnership between the Chinese corporation and the German Ritter Group. Klaus Taafel (right), Chairman of the Board at Linuo Paradigma, cut the anniversary cake together with two of the company’s production workers who have birthday on the same day as Linuo.
Photo: Linuo Paradigma

Surrounded by customers, partners and employees, Linuo Paradigma looked back on ten years of successful development. According to the Corporate Communication Department, the joint venture has 1,300 employees at four production sites, three in China – Jinan, Puyang and Shanghai – as well as one in Cuba, Middle America. The company reached a turnover of Chinese Yuan (CNY) 1 billion (EUR 109 million) in 2009.

Linuo’s main focus is on assembling vacuum tube collectors. The collector’s double-glass evacuated tubes are purchased from the Linuo Group. According to Linuo, the total produced vacuum tube collector area at the four production sites increased by 68 % in 2010, to 1.9 million m2. 93 % of these collectors were sold domestically. Since its foundation, the joint venture has increased its production output ninefold. The company claims to have a production capacity of 5 million thermosiphon systems and 2 million m2 collector area for pumped systems, and has registered 108 patents over the last ten years.

“Linuo Paradigma has turned into one of the most important players on the Chinese market. And, the cooperation between Germany and China is growing closer,” Klaus Taafel says. The foundation of an international sales company called Linuo Ritter International at the beginning of 2011 shows just how close the cooperation has become. 25 sales specialists work at this new subsidiary based in Jinan. Linuo Ritter International is responsible for sales outside Europe, offering the entire product range from non-pressurised thermosiphon systems for water heating to complex large-scale solar thermal systems generating process heat.