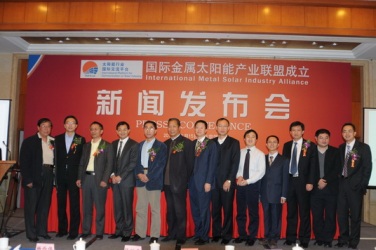 The Beijing branch of the International Copper Association (ICA) has formed the International Metal Solar Industry Alliance (IMSIA) in November 2010. “The alliance will provide a platform for its members to share best practices and cooperate in promoting copper solar thermal technologies,” Joseph Huang, Project Manager of the Building Energy Management section, explained. The alliance was officially presented to the public at a press meeting at the Beijing Hotel on 15 November 2010.
Photo: ICA

Building design institutes and real estate developers, too, are invited to join the IMSIA. The Eco-design Office of Architectural Design of Tsinghua University and the Building branch of the Beijing Tsinghua Urban Planning & Design Institute made the first step and sent representatives to the founding meeting in November.

There are four objectives the newly formed alliance has already set out:

The first of IMSIA’s activities have also been scheduled already: