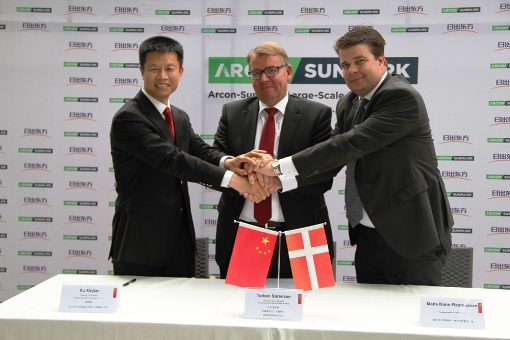 A new joint venture founded in Beijing, China, on 31 May aims at offering large-scale solar heating solutions on the Chinese market. The country’s market leader, Jiangsu Sunrain Solar Energy, and Arcon-Sunmark, a Danish turnkey large-scale system provider, joined forces to establish Arcon-Sunmark Large-Scale Solar Systems Integration Co., Ltd., headquartered in Beijing. The photo shows (from left) Xinjian Xu, Founder and Chairman of the Board of Jiangsu Sunrain Solar Energy, Torben Sørensen, Group Executive Officer of VKR Holding, the owner of Arcon-Sunmark, and Mads Kann-Rasmussen, Board Member of VKR Holding, who represents the family behind VKR.
Photo: Arcon-Sunmark
The focus of the joint-venture is the Chinese market. “China has the largest district heating market in the world,” Sørensen said about the business opportunities of the new enterprise. “Between 2009 and 2013, this segment grew by 25 %. In the northern part of the country, district heating covers about 25 % of total heat consumption.” Although this growing segment promises great potential for solar district heating, there is a lack of engineering capacities for large-scale solutions among Chinese system suppliers. This gap will be filled by the know-how of Arcon-Sunmark, which has more than 25 years of experience in the business and has been responsible for the installation – and partly also the operation – of some of the largest solar heating systems worldwide: The Gaby mine in Chile, the 37 MWth plant in Vojens, Denmark, and the 105 MWth district heating unit that is under construction in the Danish town of Silkeborg.
Offering solutions based on Arcon-Sunmark collectors
Apparently, the Danish partner is also the driving force behind the joint-venture, as the Sunrain brand is not part of the name of the recently founded company. “Arcon-Sunmark Large-Scale Solar Systems Integration will handle the sale, installation and operation of Arcon-Sunmark solar heating solutions in China,” said a press release sent out by Arcon-Sunmark on 6 June. “We will offer solutions purely based on Arcon-Sunmark collectors, which are – and will be – produced at our facilities in Denmark and Vietnam,” Sørensen confirmed.
“We are very pleased to welcome Arcon-Sunmark to China and to become their partner. Together, we can meet the high demand from the Chinese market,” Sunrain’s chairman Xu was quoted in the press release. The 6,500-staff group is the only Chinese solar thermal manufacturer and system supplier listed on the Shanghai Stock Exchange and offers solar solutions in more than 100 countries and regions worldwide. It produced 5.4 million m² of vacuum tube collectors and 200,000 m² of flat plate collectors in 2014 and is the largest manufacturer worldwide, according to information that the company provided for the 2015 world map of the solar thermal industry.
Websites of companies mentioned in the article:
http://en.sunrain.com/
http://arcon-sunmark.com/