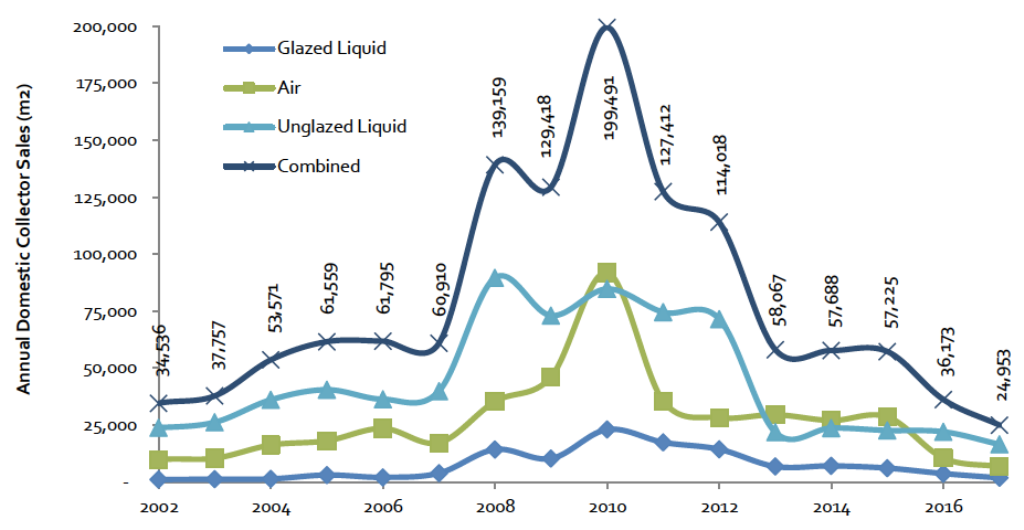 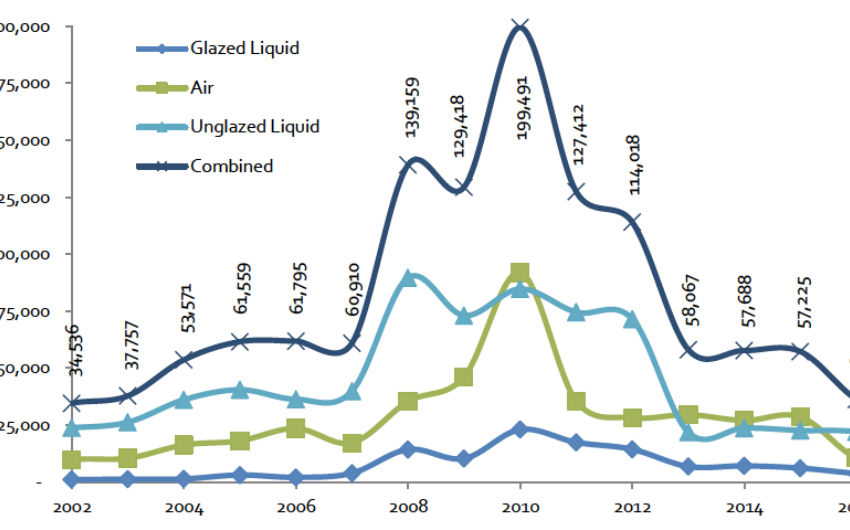 The solar thermal market in Canada, a long-term member of the IEA Solar Heating and Cooling Programme, is comparatively small: Only 24,953 m² of collector area was installed last year. On top of this, the recently published Survey of Active Solar Thermal Collectors, Industry and Markets in Canada (2017) shows a marked decline in domestic sales (31 %) and exports (40 %) in 2017 compared to 2016 (see attached document). The document was prepared by Canadian-based ClearSky Advisors on behalf of Natural Resources Canada, which represents the country on the IEA SHC Executive Committee. NRCan began publishing annual market reports in 2002.

Key market data for 2017 and 2016
Source: NRCan
Drawing on 19 questionnaires submitted by technology suppliers, the report depicts a very diverse market: Residential pool heating via unglazed liquid collectors contributed more than half to the total. The second-largest group of products comprised air collectors, which were used exclusively to heat space in commercial buildings. Domestic hot water, the main application in solar thermal markets worldwide, covered only 4.4 %.
The authors underline that demand for solar thermal in Canada is quite low, so that individual businesses or projects, particularly large commercial and industrial systems, can make or break success. Furthermore, residential use can vary greatly due to a number of factors, and many companies providing technologies for residential buildings experienced dwindling sales in 2016 and 2017.
Canada’s diverse market showed a sharp decline regarding all sorts of solar thermal products.
Source: NRCan
In 2017, the Province of Ontario was the biggest driver of sales, generating about one-third of all domestic industry revenues, although the share was down from 51 % recorded in 2016. Furthermore, the Atlantic province maintained its lead role, with CAD 0.34 per head. The Prairie and Atlantic provinces accounted for 20 % of the total, followed by Quebec at 19 %.
Outlook: not very bright
During the survey period, industry respondents were additionally asked about their expectations of market progress throughout the next years. Only 6 % of them said they expected growth, whereas 38 % predicted a more or less stable market. And 56 % thought that sales would shrink again. This means that, in all, 94 % of the companies surveyed did not believe that the market would rebound.
IEA SHC is an international research and information programme on solar heating and cooling technologies. Around 200 experts from 21 countries and five organisations cover a wide range of topics, from urban solar planning to future storage tank design and the integration of large-scale solar fields into district heating and cooling networks.
Organisations mentioned in this article:
IEA SHC Programme: https://www.iea-shc.org/
ClearSky Advisors: http://www.clearskyadvisors.com/
Natural Resources Canada: https://www.nrcan.gc.ca/
https://solarthermalworld.org/wp-content/uploads/2018/10/2018-08-16_survey_of_active_solar_thermal_collectors_-_aug_18_2018_cl.pdf