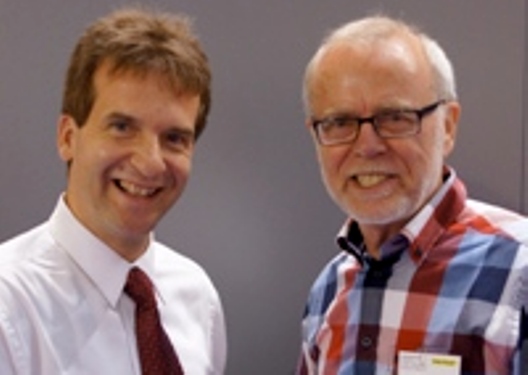 Canadian air collector manufacturer Enerconcept uses Danish know-how for the industrial version of its Luba collectors. On 1 July, CEO Christian Vachon (left) entered into an agreement with the owner of Danish company Solarventi, Hans Jørgen Christensen, allowing Enerconcept to use an air collector patent of the Scandinavians. The innovative technology has already been implemented in a major project in Quebec City.
Photo: Stephanie Banse

“Through the patent license agreement, Enerconcept was able to develop an industrial roof-mounted version based on our residential solar air heater Solarventi,” explains Hans-Jørgen Christensen. Solarventi produces its air collectors without the usual insulation at the back. “This design allowed us to create a much lighter and cheaper collector, which is easy to mount. Also, thermal performance is as high as with our former Luba GL design,” says Christian Vachon. “The performance factor on Canadian Standards Association (CSA) and RETScreen amounts to 1.10.”

“Essentially, the Solarventi patent is innovative in that the air isn’t sucked in at the side of the collector, but across the entire back wall,” explains Christensen. “The back of the collector consists of evenly perforated aluminium and the interior of black felt, which also functions as a filter and absorber. In summer, the filter is heated up to about 80°C, which purifies it in a natural way.”

The holes on the back of the collector result in self-cooling by convection, which makes the maximum temperature of the new Luba models less than 150°C. In the smaller collectors by Solarventi, the temperature is at a standstill even below 85°C to avoid damaging collector-integrated PV modules for power generation.

And, because the air is sucked in across the entire back and not at the sides, the design also offers much lower resistance to air flow, saving energy for the fan in large systems. Further material is saved because of the double back wall made of perforated aluminium and felt, which produces the same effect as an insulation. “If the air is sucked in through this back wall, it loses very little heat. The wall remains cold, even though the sun heats the felt on the other side,” says Christensen. “A total thickness of 3 mm is sufficient for an effective insulation – just by the movement of air.” 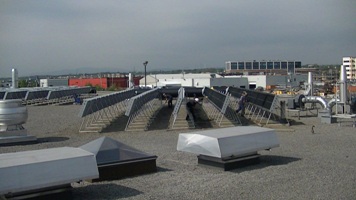 In Canada, the Danish know-how was first implemented at a large installation in Quebec City. A total of 364 m² air collectors were mounted on the roof of the garage at the Quebec City transportation authorities, in which city buses are serviced. The Luba GL collectors installed there heat up 36,900 m³ of air by 10 to 12°C per hour.
Photo: Enerconcept

“The potential cost cuts through the non-insulated backside were of central importance to us,” says Vachon. “With our former design with insulation, we wouldn’t have gotten the job.” Meanwhile, there have already been plans for other projects with the new collector design. Enerconcept works exclusively on large industrial systems, whereas Solarventi operates in the residential sector. According to Vachon, cooperation and know-how sharing is a natural fit for these two companies, as both have a foothold in the solar air heating industry. At the moment, the two companies are also discussing the possibility of Solarventi taking over the production of the Luba collector for the European market.