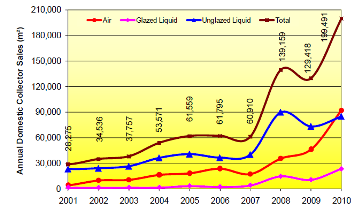 2010 was a good year for the solar thermal industry in Canada. The total newly installed collector area (brown line) grew by 54 %, from 129,418 to 199,491 m2. Air collector sales (red line) doubled and – for the first – overtook the solar swimming pool market (blue line), which is more or less stagnating. With 150 %, the segment of glazed solar water collectors (pink line) experienced the highest growth, although the 20,000 m2 sold in 2010 make it still a low-level market.
Source: NRCan

This time, the annual Survey of Active Solar Thermal Collectors, Industry and Markets in Canada 2010 published by National Resources Canada (NRCan) can show off some superlatives: Total collector sales, including domestic and export, amounted to 252,146 m2, finally exceeding 200,000 m2 . The same picture with the collector area in operation: it has now surpassed 1 million. According to the NRCan statistics, there were 1,033,864 m² of collector area in operation in the country by the end of 2010.

The survey included the filled-in questionnaires from 29 companies in Canada. “However, only 21 companies responded in both years, with eight companies dropping out, and eight new ones added,” the study’s author Dr Reda Djebbar from Natural Resources Canada names a weak point in the study’s conclusions, which makes comparisons between two different years somewhat difficult.

And, what about the forecast for 2011? A majority of the companies still anticipate growing sales in the near future. “However, there is a strong polarisation in the industry, with larger companies being pessimistic, and smaller companies showing optimism,” Djebbar analyses in the study. The author sees a pessimistic mood on the rise in the Canadian solar thermal industry: “The number of companies expecting either no growth or a decline has increased from 0% in 2007 to 20% in 2008, 26% in 2009 and then to 36% in 2010”. The planned end of the ecoEnergy for Renewable Heat programme in March 2011 contributes to the pessimistic forecast of some industry players. The solar pool heating market, on the other hand, has been unaffected by the lack of subsidies.

Another event which has recently weakened the solar thermal market: the elections in the province of Ontario in October 2011. Re-elected Ontario Prime Minister Dalton McGuinty had announced during his campaign that the feed-in tariff for solar electricity would continue under the Green Energy Act, which means that Ontario’s solar thermal industry will keep staying in the shadow of photovoltaics. This has a strong influence on the market, because Ontario has been the market leader among the provinces, reporting 55 % of all sales (by revenue) in 2010.

Still, Canada has established itself as the world leader in solar air heating usage. The largest air collector manufacturer in the country, Conserval Engineering, pointed out earlier this year, “that it is a big mistake in the European legislation not to consider solar air heating systems as a renewable heating technology”. Apparently, the European Renewable Energy Directive (RED) 2009/28/EC actually excludes solar air heating units from the list of approved solar technologies. “The error came to light when the UK government recently introduced its Renewable Heat Incentive (RHI), which specifically excluded solar air heating,” Conserval explained in a press release in July 2011. Greg Barker, Great Britain´s Minister of State from the Department of Energy and Climate Change, is quoted in the press release, saying: “The RHI will only include technologies which the European Commission considers to be renewable under the RED.”