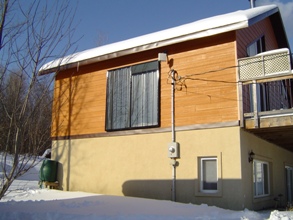 Canada overhauls its standards for solar collectors: The Public Review Draft of the new F378 Series has currently been posted to the CSA Public Review website. Comments can be submitted until 29 January 2011. The F378 Series includes liquid based collectors, as well as all types of solar air collectors.
Photo: Yoursolarhome

“The existing standard, F378-87 for solar collectors, has been used as a seed document and has been updated since the F378-87 was originally released in 1987,” Candace Sellar, CSA Project Manager, says. “There have been test method improvements and many new technologies introduced to the marketplace since the original publication, making an update of the existing standard necessary.”

Publication of F378.1 and F378.2 is scheduled for June 2011. Natural Resources Canada (NRCan), the Canadian Solar Industries Association (CanSIA), Ontario Ministry of Energy (OME), BC Hydro, and Manitoba Hydro have been financial supporters to enable progression of these documents. The Technical Committee on Solar Energy has expressed interest in forming an CSA-Canadian National Committee for the international ISO Technical Committee on Solar Energy (TC 180). So far, Canada has neither been a participating nor an observing country in TC 180.