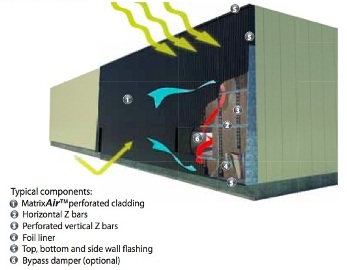 In October 2007, Conserval Engineering brought a patent infringement lawsuit against Matrix Energy.  “Since that time, Matrix Energy has vehemently defended its right to offer an alternative, transpired solar air heating product on the market,” the company states in its press release. “It is unfortunate that Conserval Engineering chose litigation rather than working together to foster the growth of this technology in this nascent industry for the benefit of all stakeholders. The decision of the Federal Court of Canada renews our motivation to continue to develop and market solar air heating systems that reduce conventional energy usage and greenhouse gas emissions in the commercial, industrial, institutional and agricultural sectors around the world.”

Matrix Energy Inc, which was founded in 1985, has been offering several façade- and roof-mounted solar air heating systems under the MatrixAir brand name. Conserval Engineering is an engineering company, which invented and commercialised solar air heating technology under the Solarwall brand. For the past 30 years, Conserval has been providing renewable energy solutions in over 30 countries.