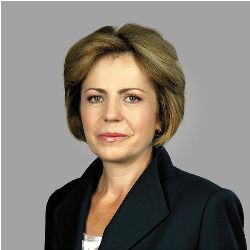 Making Sofia a “clean and green city” and “a European capital in sustainable development” is what Yordanka Fandukova (see photo) promised before being re-elected as mayor in October of 2011. As an important part of her plans, she named the installation of solar thermal energy facilities on roofs of public buildings, such as nurseries, schools, hospitals and administrative centres. However, the implementation has not worked out as desired, admits Irina Savina, Sofia’s Deputy Mayor for Investments and Construction. So far, only five nurseries have been equipped with a solar water heating system.
Photo: Wikipedia

According to the current law for renewable energies, Bulgarian cities are obliged to develop short- and long-term programmes to increase their use of renewable energies. Over the last years, Sofia has undertaken numerous initiatives and published several strategies on how to approach the issue. But until now, there seems to be a wide gap between efforts and results. During the debate about the city budget in February 2012, Mayor Fandukova was criticised by opposition leaders for not fulfilling her promise of using renewable energies in public buildings.

“Already in 2006, we began to examine the climatic conditions in our region and the state of our six hundred city structures,” says Savina. “As we found out, Sofia shows favourable conditions for the use of solar energy, even though it is located in the weakest of the three sun zones of Bulgaria”. Unfortunately, she adds, the shape that public buildings were in turned out to be much worse than expected. “So, when we begin to renovate nurseries or schools, we usually have to replace the windows and fix the roofs first before we can even think about installing solar thermal equipment,” she explains. Still, installing solar thermal systems on public buildings has remained an essential part of the long-term development programme by the Municipality of Sofia, Savina assures.

According to the vice mayor, there are three ways to finance energy-efficiency improvements of city buildings: Funds from the European Union’s Operational Programme “Regional Development” (OP RD), the municipal budget and energy contracting. “Because we can spend the money from the OP RD only for energy efficiency measures, but not for renewable energy projects, Sofia’s municipal budget stays limited and directed towards other priorities,” says Savina. The vice mayor sees so-called Public Private Partnerships (PPPs) as the only way out of the financial gridlock. This means that the municipality cooperates with private companies specialised in the field of renewable energies in order to install solar thermal energy facilities on the city’s buildings. But to make PPPs an option at all, the law for these partnerships had to be revised, she says. “The new draft for public private partnership has already been approved by the parliament after the first reading, which means it should become law soon.”

“At the moment, we are studying European practices in the area of so-called Energy Service Company contracts (ESCO),” Savina adds. ESCO is a special kind of contract between a client who wants to improve a building’s energy efficiency and a company ready to deliver the design and implement the project. It guarantees that project costs are lower than the money gained by energy savings.

Alexander Vodenicharov, who runs engineering company Enersyst, says: “It´s easier to work for provincial cities, because authorities there can decide more quickly whether to install a solar thermal facility on a public building.” His company specialises in consulting and implementing renewable energy projects according to the ESCO concept. Although situated in Sofia, Enersyst works more often for smaller municipalities across Bulgaria. “The Municipality of Sofia owns very many buildings and the bureaucracy is huge,” Vodenicharov says. He believes this is why Sofia had not made any noticeable progress in its renewable energy strategy as it had hoped to by now.

Until the end of this year, Sofia plans to renovate forty of its buildings. By 2017, the city wants to refurbish all of the six hundred buildings it owns. A few weeks ago Petar Dikov, an architect working for the Municipality of Sofia, estimated the total roof surface of public buildings in Sofia to be 350,000 m². He sees a huge potential not only for solar thermal installations, but also for photovoltaics.