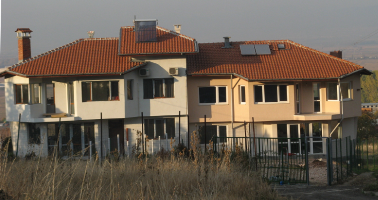 In May 2011, the Bulgarian government published its new Renewable Energy Act, with considerably less favourable conditions for investors in wind farm and photovoltaic projects. However, it removed some hurdles for installing solar collector systems on residential housing by eliminating construction permits for solar water heater installations. Solarthermalworld.org has asked some solar thermal system providers if this new requirement supported market development. The photo  below shows a solar thermal installation in the village of Lozen in the south-west of Bulgaria (Photo: Frank Stier).

Petar Papazov, Managing Director of engineering company Arei Bulgaria, welcomes the May 2011 Act: “We truly believe that roofs should be utilised for solar energy purposes – be it electrical or thermal systems. The law rightly focuses on reducing the bureaucracy that accompanies every installation,” he says. But renewable energies in Bulgaria have still a long way to go, Papazov adds. In his opinion, the Prime Minister should be advised, “that renewable and traditional energy sources both have their proper place in the energy mix”.

According to Papazov, the numbers of solar thermal plants in Bulgaria is increasing very quickly and outpace the more expensive installations for photovoltaics. Arei Bulgaria installs solar thermal systems not only on the roofs of private houses, but also on commercial buildings, such as hotels and even industrial complexes. “We think that the market for solar thermal in Bulgaria will grow, because climatic conditions are favourable for this type of energy and people can save money with it in the mid-term,” Papazov says, sounding optimistic.

A lot of solar thermal collectors can be seen on the roofs of the houses in the little village of Lozen, much more than in the nearby capital Sofia. Why? “Because in big cities, most people own flats in multi-storey blocks,” says Stanislav Kanev. He runs the engineering company for renewable energies, Ris Kanev, in Lozen. “Even if flat owners like to heat their water with solar thermal energy, it would be difficult for them to reach an agreement with their neighbours.”

In summer, Kanev’s company installs mainly solar thermal systems, in winter it is predominantly biomass furnaces. Like Papazov, Kanev is confident about the economic prospects of renewable energies in general and solar thermal collectors in particular. “Last summer, we installed twenty solar thermal collectors. That´s OK, but not as much as it had been before the economic crisis,” Kanev says. The construction permit that was removed with the Renewable Energy Act did not really compensate for the negative effects of the financial downturn.

According to Kanev, solar thermal installations with a storage tank capacity of 200/300 litres and a collector area of 5 m2 could provide almost all of the warm water demand for a family of four between early spring and late autumn. “Such a family could save on average Bulgarian Leva (BGN) 100 (EUR 50) per month over the entire year. Of course, the upfront investment of BGN 6000 (EUR 3000) is much money for Bulgarians,” Kanev says.

There are no governmental subsidies for private investments into solar thermal installations, Boyan Rashev, Managing Partner at Denkstatt Bulgaria (a consulting company for sustainable development), reports. “But they are not necessary either, because commercial banks can ask for financial support by the European Bank for Reconstruction and Development (EBRD) to grant credits to people who want to install solar thermal collectors.” Under the energy efficiency programme of the EBRD, private individuals can get grants of up to 20% of the investment costs of a solar heating system, capped at BGN 1,955.