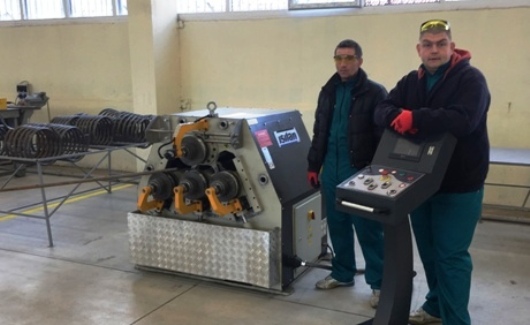 When it comes to renewable energies policy, Bulgaria is certainly not the most progressive country in Europe. So what GE Prisons Production (GE PP) did was an even more notable endeavour: The government-owned company established a so-called Green Plant on the premises of the Sofia Central Prison to manufacture solar water heaters. “I believe that the utilisation of solar energy is the future,” Yavor Dimitrov, Production Manager at GE PP said. “With many sunny days, climatic conditions in Bulgaria are favourable for this type of energy, which is why we decided to launch a production unit for solar thermal energy systems.” Before the solar business, GE PP had already been operating various production plants for window frames, furniture and clothing across the country. The photo shows a factory in Sofia for the manufacture of heat transfer coils, including two of the workers employed there.

Photo: GE PP
Norway funded the project with EUR 414,000 as part of the Green Industry Innovations Programme Bulgaria under the auspices of the Norwegian Financial Mechanism 2009-2014. And a Norwegian company – which in the words of Dimitrov, “is at home in the field” – supported GE PP to start up the production of solar collectors and water boilers. “They not only informed us which machines we need, but also helped us to purchase them and to set up the production line. Hence, we didn´t have to start from scratch.”
Production cycle of up to three shifts
The Bulgarian-Norwegian cooperation project of a plant producing solar water heaters had already been presented to the public in November 2015, but production hasn’t started yet. “Of course, we have an implementation schedule. Unfortunately, not everything depends on us, but also on other institutions. That is why we haven’t been able to announce yet when the first systems can be delivered. At least, we have already produced our first solar thermal energy systems and tested them. Currently, we are in the process of documenting our products and having them certified,” Dimitrov explained the development of the Green Plant project. GE PP intends to produce complete solar water heaters, for which it will only purchase the vacuum tubes, but manufacture tanks and manifolds on its own.
According to Dimitrov, 130 prisoners have been trained in operating the machinery and will begin their work once commercial production starts. “Currently, we have 19 people working at our plant. How many will be employed in total will depend on actual demand. We are prepared for two or even three shifts,” the production manager said, emphasising the benefit to the employees. “The work is good for them, because as we leave every day and go to work and earn our money, they also live their daily life in a more or less normal social milieu.”
Production of complete solar water heaters with different mounting systems
GE PP won´t manufacture on behalf of other companies, but intends to distribute its products directly via the trade network – brand name: Sinox. “I think we will succeed because we are well prepared regarding the technical and organisational aspects of our work,” Dimitrov said, filled with optimism. Most of the materials used for Sinox solar water heaters are delivered by Bulgarian suppliers, but the vacuum tubes are bought from a Chinese company. “To guarantee the best possible utilisation of solar energy for every building, we offer various models for flat and span roofs.” At first, Sinox will limit its sales efforts to the Bulgarian market, but the GE PP manager won´t rule out the possibility of a distribution to other European countries in the future.
So far, Green Plant has not had any cooperation with renowned Bulgarian producers like Sunsystem. “I don´t even know whether they know of our existence. But competition is good for business and most of all it is good for customers, who get better products at more favourable prices,” Dimitrov said. What he, however, did not mention was that the new competitor could cause a distortion of competition, as GE PP is most probably paying lower wages.
GE Prisons Productions: http://www.dpfzd.com
Norway Grants: http://www.eeagrants.org