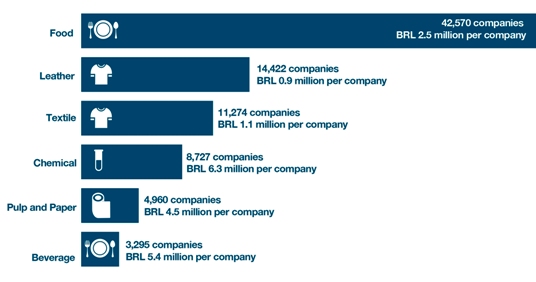 Tens of thousands of companies in Brazil’s industry could be interested in using solar heat, as shown by the chart at the beginning of this news article. Businesses which require large amounts of thermal energy below 400 °C can be found in several sectors, from beverage, chemical and food production to leather and textile making – the right kind of clientele for solar thermal suppliers. These are two of the key findings from the Solar Heat for Industry: Brazil study (see the attached document written in Portuguese), which was published this month as part of the Solar Payback project. It will be presented during the Solar Payback Conference, a half-day event scheduled to take place on 30 August at the Intersolar South America in Sao Paulo (see the attached flyer).
Source: IBGE/CNI 2015 and Solar Payback
The authors of the study analysed data collected in Balanço Energético Nacional describing industrial energy flows and sources across the country (see also the pie chart below):

Final energy consumption in all sectors in Brazil in 2016. The total – 229.12 Mtoe – can be found on the left and heat demand in industry – 59 % below 400 °C – on the right. The key charts in Portuguese from the current study can be downloaded here.
Source: Saygin 2014 and EPE 2017a
Stakeholder meeting to discuss barriers and support measures

Photo: Solar Payback
Despite the high potential for SHIP technologies in Brazil, there have hardly been any efforts to build systems for industrial clients. Representatives from industry associations, universities, government ministries, development banks and the solar thermal sector met in the capital, Brasilia, on 23 May to discuss barriers to market adoption and opportunities to increase it.
“Currently, solar thermal technologies are mainly used in Brazil’s industry to heat changing rooms and canteens,” said Professor Elizabeth Duarte Pereira, who works at the university in Belo Horizonte, and called for a dedicated strategy to generate interest in industrial solar heat applications. She also criticised the focus on the electric power sector for providing energy efficiency. In addition, small and medium enterprises (SMEs), the backbone of the country’s industrial sector, had found it difficult to obtain funding from government programmes and development banks.
“We need credit lines that include SHIP technologies and target SMEs,” said Rafael Campos, President of the Brazilian solar thermal industry association Abrasol, one of the partners to Solar Payback.
The attendees supported the recommendation made in the Solar Heat for Industry study to set up an efficiency programme similar to the Programa de Eficiência Energética (PEE), which the Agência Nacional de Energia Elétrica established in the electricity sector. The scheme, which would be managed by the Agência Nacional do Petróleo, Gás Natural e Biocombustíveis, was thought to be an effective tool to stimulate the SHIP market. In the electricity sector PEE stipulates that electricity suppliers must invest 0.5 % of their net turnover in energy efficiency measures.
The attendees also agreed that considerable effort was needed to communicate the benefits of SHIP technologies to potential customers in industry, as most beverage, food, leather and textile companies had not yet been made sufficiently aware of their solar thermal options in production. The next item on Solar Payback’s agenda, a free-of-charge conference to be held in Portuguese during the Intersolar South America, is hoped to rectify the situation.
Organisations mentioned in this article:
Abrasol: http://www.abrasol.org.br
Solar Payback: http://www.solar-payback.com
Agência Nacional do Petróleo: http://www.anp.gov.br
Programa de Eficiência Energética: http://www.aneel.gov.br/programa-eficiencia-energetica
ANEEL: http://www2.aneel.gov.br/?idiomaAtual=1
Intersolar South America: https://www.intersolar.net.br/en/home.html
Balanço Energético Nacional: https://ben.epe.gov.br
https://solarthermalworld.org/wp-content/uploads/2018/08/shipbrasil_pt2018_final_aout_2018.pdf
https://solarthermalworld.org/wp-content/uploads/2018/08/flyer_solar_payback_conference_0.pdf