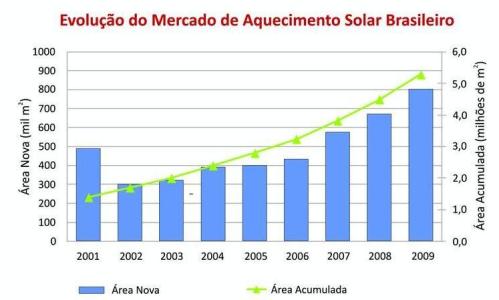 the chart about the development of the solar thermal sector in Brazil. Even in the economically difficult year of 2009, the area of installed collectors increased by 19 % to 798,000 m2. Two-thirds of the installations were set up in the four states of São Paulo, Minas Gerais, Rio de Janeiro and Espirito Santo, all located in the south-east of the country. Source: Dasol

Published in the July issue of SolBrasil, the bimonthly magazine by DASOL (the Solar Heating Department of the association ABRAVA), the above-mentioned figures base on a market survey that the association carried out in May this year. According to the survey, manufacturers expect a growth between 15 to 20 % in the coming years. DASOL market statistics include glazed and unglazed water heaters.

The figure above depicts the share of newly installed collector area in 2009 throughout the different regions of the country. Most of the market activities (82 %) are concentrated on the south-east and southern region of the country.
Source: Dasol

According to Carlos Faria Café, founder of Brazilian consultancy SE-Studio Equinócio – Marca Solar Group, solar water heaters play a crucial role in reducing the electricity load in Brazil. “In Brazil, the use of electric showers for water heating has spread as far as in no other country in the world,” Café states. According to PROCEL’s (National Program for Electricity Conservation – http://www.procel.gov.br) last poll of 2005, there are more than 40 million electric showers installed all over the country. Café calculates that these units consume about 6% of all electricity produced in the country and account for approximately 18% of the peak demand of the national electric system – or to say it in other words: “Nearly 20,000 MW from hydro and thermal power plants are needed just to turn the electric showers on.”

You can download the July issue of SolBrasil, the bimonthly magazine of DASOL, at: http://www.newsflip.com.br/pub/abravadasol/

This text was written in cooperation with Carlos Faria Café, Director of SE-Studio Equinócio – Marca Solar Group, based in Brazil (café@studioequinocio.com.br).