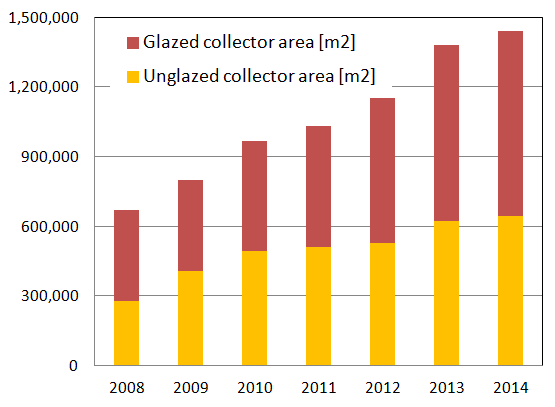 The Brazilian market for solar collectors grew by 4.5 % in 2014, according to numbers published by DASOL, the Solar Heating Department of the Brazilian Association of Refrigeration, Air Conditioning, Ventilation and Heating, ABRAVA, in early July 2015 (see the attached pdf). In total, DASOL reports 1.44 million m2 of newly installed glazed and unglazed collector area throughout the year. The glazed market segment grew by 5.3 %, a little more than the unglazed segment with 4.6 %. After two years of double-digit growth rates, this is a rather small increase owed to the overall economic slowdown. The share of vacuum tube collectors remains marginal, accounting for no more than 1.1 % of total sales.
Source: DASOL / ABRAVA

Market growth has lost some momentum compared to 2013, when collector sales increased steeply by 19.8 %. Last year’s slowdown may be blamed to some extent on the general deceleration of the Brazilian economy, which had a negative effect on government housing using solar water heating programmes, such as Habitação de Interesse Social (HIS), as Marcelo Mesquita, Executive Secretary of DASOL, puts it.

The most surprising result revealed by the data collected in February 2015 was the growing share of industrial users of SHC in total collector sales. Brazilian producers sold 17 % of their collectors to industry last year. “We expect the industrial market share to increase the more companies are becoming aware of the opportunities that solar heating and cooling offers when it comes to reducing energy costs and increasing competitiveness,” Mesquita says. Because of the growing demand but limited supply of electricity, Brazilian energy prices are likely to rise again and make it even more attractive for investors to use SHC.

2014 collector sales broken down by the segments in which the new total collector area of 1.44 million m2 was installed
Source: DASOL / ABRAVA

So far, the private residential market still gets the biggest piece of the pie, however, accounting for 51 % of total sales, whereas public housing programmes accounted for only 16 % (slightly less than in 2013). But Mesquita stressed that the structural differences of the companies participating in the study make it impossible to draw direct comparisons between shares in 2014 and shares in 2013. In 2013, 77 % of the DASOL participants which produced collectors and tanks participated in the survey, but the share went down to 45 % for this year’s survey. According to Mesquita the data is extrapolated to the entire country in both years.

According to the DASOL data, Brazil now has about 11.2 million m2  of installed collector area, which substitute 7,354 GWh of electric energy that would have otherwise been used to provide hot water or process heat without solar thermal. Brazilian Energy Research Company, EPE, has calculated that this amount of energy would be enough to guarantee the electricity supply for 3.9 million households, which is more or less the size of the megalopolis São Paulo.

This news was written by Vanessa Kriele, a German freelance journalist specialised in renewable energies and world economics.