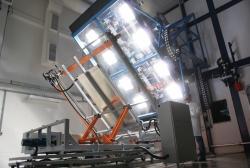 The building installations lab of the Institute for Technological Research, IPT, in São Paulo inaugurated its solar simulator on 26 August which it has bought some time ago. The simulator is thought to support the development and testing of solar thermal collectors. Setting it up has been an important step towards implementing the new Brazilian compulsory certification scheme  for solar water heaters. The state government has funded 90 % of the investment of Brazilian Real (BRL) 3.5 million (USD 1.8 million). To ensure the accuracy of the measurements, the system was installed in a room with eight metre high ceilings. An air conditioning system keeps the temperature constant, with a tolerance level of +/- 1°C.
Photo: IPT

With the new testing laboratory, the IPT aims at improving the quality of production and engineering of solar water heating systems in Brazil. “The simulator will both determine the energy efficiency of solar thermal collectors and perform tests on photovoltaic systems,” explains researcher Douglas Messina. He will be responsible for coordinating the work at the simulator. Aging tests, however, will not be part of the simulation, because they rely on specific cameras which have not been available to the researchers.

The IPT equipment needs a power supply of 50 kW for the hydraulic carriage drive and the special electric lamps. The collector system can be tilted to any degree between 0 and 90 °C, depending on the desired measurements. Lamp intensity can be adjusted to different levels of radiation. Because the process is automated, the configuration of each study can be stored and used again for later measurements.

The commissioning of the test laboratory reduces the shortage of testing capacities in Brazil. In addition to IPT, another test laboratory at the UNA University Centre, Belo Horizonte, Minas Gerais, will also set up a new indoor simulator. The sector expects a faster implementation of the new mandatory labelling scheme, provided that the quality tests confirm the technological evolution in the Brazilian solar thermal sector. In 2012, there may be 1.2 million solar collectors installed across the country (including glazed and unglazed collectors).