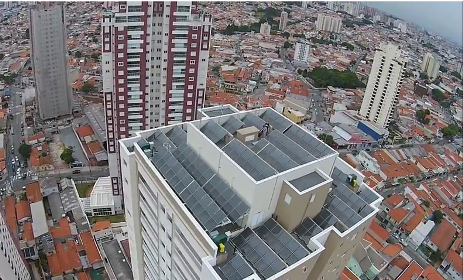 São Paulo’s around 30,000 new building permits per year and a municipality bylaw (Number 14449/2007) which has required construction companies to make solar water heating part of almost every newbuild since 2008 have created expectations for a flourishing solar thermal sector in this Brazilian city. Independent consultancies estimate that the local solar obligation has led to 110,000 m² of collector area installed at residential buildings.
Photo: Velp Mais

According to a presentation held during the Brazilian Solar Heating Congress, CB-Sol, in September 2015, the residential sector accounts for 24 % of São Paulo’s electricity consumption. And power prices are still rising at an impressive pace all over Brazil, because electricity supply cannot keep up with demand. Hence, compliance with the energy efficiency regulation should be considered crucial by the municipality autorities of the city of São Paulo. There is, however, no official statistic showing the solar obligation’s impact on the collector area installed.
Number of construction permits issued by the São Paulo municipality.
*Estimate
Source: São Paulo State Housing Syndicate (Secovi-SP)
According to an estimate by local energy efficiency consultant José Jorge Chaguri Jr, São Paulo has seen the installation of 110,000 m² of solar collectors in the residential sector since the solar obligation came into force. Chaguri’s data is based on mathematic models from the projects in whose development he took part, but he says: “The data isn’t precise.” One reason for the non-precision is the building law’s lack of a size specification regarding collector area. “The bill stipulates that almost every residential or commercial construction project must include a solar thermal system which covers 40 % of the total energy needs for water heating. But the area installed may vary depending on the supplier,” Chaguri explains: “The less efficient the collector, the bigger the number of collectors installed.”
Flats offer preinstalled solar water heaters
Let us just assume that each housing unit will only be equipped with a simple 2m² system. This would lead to more than 50,000 m² of newly installed collector area annually across the city of São Paulo alone. Unfortunately, the maths is not that simple. First, the bill does not apply to a lot of buildings, only to structures with more than four bathrooms. Second, as Nathalia Moreno from the association DASOL / ABRAVA explains, it has not been an easy task to convince Brazilian companies to state their sales volume or installed area – even during an anonymous survey as the one DASOL is conducting on a yearly basis. Hence, there is no reliable data on the installed area and the impact of the law.
But other market participants consider Chaguri’s estimate to be fairly accurate. According to Mauricio Milhin, whose company Velp Mais has installed more than 43,000 m² of collector area since it was founded in 2001, Chaguri is one of the most active project designers in São Paulo. Milhin told solarthermalworld.org that in his opinion, most construction companies complied with the law and new flats were now being offered with solar water heating preinstalled. And although there is no official inspection after the building is handed over, homeowners will need a so-called Habite-se, a document certifying that a building is in a condition to be used for residential purposes, when letting flats. An approved solar heating project is one of the prerequisites for issuing the document.
Flat owners are the best inspectors
“The best inspection is the one done by the people moving into the house. They can sue the builder if something is wrong,” says Lucio Mesquita, consultant from Thermosol Consulting in Brazil and Canada. According to Mesquita, the bylaw also has a secondary effect, which is starting to move ahead: “Those are buildings with less than 4 bathrooms which were not required to have solar, but had to have the infrastructure ready, and now people are moving into those buildings and inquire about solar.”
When it comes to relating growth to the implementation of the bill, Milhin says: “The effects of the bylaw could not be witnessed until 2011, partly because of the time it takes to set up a building (construction cycles), partly because of the negative impact of the global financial and economic crisis on Brazil in 2009 and 2010.” The industry had shown strong growth rates from 2001 to 2008, before the law was passed. People had asked for technologies which saved electric energy because of the fragile national electricity market, which was on the verge of collapse in 2001. “We experienced a certain stagnation in demand from 2009 to 2010, but in the following years we managed to achieve an annual growth rate of 40 to 50%, committing ourselves mainly to new residential projects affected by the bylaw,” explains Milhin. Growth numbers decreased only when the Brazilian economy as a whole started to slow down in 2014. All in all, there seems to be a positive impact coming from the bylaw, although it is hard to put in numbers.
Moreno, however, says that São Paulo is far from being the city most eagerly installing solar thermal systems: “Many people don’t know the technology and mistake it for PV. So they turn away because they think it will be too expensive.” It is one of the reasons why DASOL is currently investing a lot of time and money in campaigning for solar heating as a way of saving money.
This news was written by Vanessa Kriele, a German freelance journalist specialised in renewable energies and world economics.
More information:
http://www.secovi.com.br/en/&nbsp;
http://www.chaguriconsult.com/
http://www.velpmais.com.br