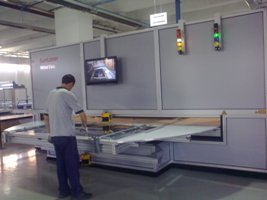 2009 marks the big year of solar investments for the British Baxi Group. It was at the end of June, when its Turkish subsidiary Baymak inaugurated a new absorber and collector manufacturing unit in Istanbul. The next inauguration of a collector manufacturing line at the Spanish Baxi plant in Fabrigas is scheduled for December – just half a year later.

In 2008, the Group already invested in a New Technologies Centre in Preston, Great Britain, which focuses on the research and development of future heating products. “We are one of the bigger players in the European solar thermal market, with a shipped amount of more than 250,000 m2 of collector area last year,” Jose-Antonio Pérez tells us. He is the Baxi Group Product Manager Solar – a new established position since the beginning of the year. The Baxi Group is one of Europe’s largest manufacturers and distributors of domestic and commercial water and space heating systems. It employs 4,200 people across Europe and reached a turnover of more than € 1 billion lately.

Regarding the question about the product and sales strategy of the two manufacturing plants that operate within the same company group, Perez answers: “We will supply the Western European countries like Spain, France, Italy, Great Britain and Belgium from our collector assembling line in Spain. Turkey will supply Eastern Europe and the Far East.” Brötje, the German subsidiary of the Baxi Group and the biggest purchaser of collectors within, is still buying collectors from the Austrian OEM manufacturer Greenonetec. Perez did not comment on the question, when Brötje will shift to collectors produced within the group.

In-house development: Baymak purchased this harp brazing machine from a mechanical engineering company in Turkey that is a newcomer in the solar thermal industry. Photo: Baymak

The Baxi Group invested US$ 3 million in a whole range of automated production machinery for the Turkish plant. The new collector producing unit is part of a large, brand-new factory complex, which was set up last year and covers an area of around 60,000 m2. “Baymak perceives the crisis as an opportunity for growth instead of a threat to it,” Tacnur Yilmaz, the export deputy manager, explains the company philosophy. So far, the Turkish Baxi subsidiary has been one of the smaller manufacturers in Turkey, producing 40,000 m2 of collector area in 2008.

The key component of the new line is the laser-welding machine delivered by the Swiss company Sunlaser. Until now, Baymak produced collectors with ultrasonic-welded absorbers. Within the next two years, the company will switch over entirely to laser-welding technology. The Sunlaser machine is loaded by hand and has a capacity of 150,000 pieces per year, which corresponds to 375,000 m2 of collector area. It is equipped with two horizontal rotation tables, which makes the loading process very easy to handle. The worker can already fix pipe register and absorber sheet at one table, while another pair of pipe register and absorber sheet is being processed in the machine.

In addition, Baymak has bought a number of other machinery equipment, such as a tunnel boring machine for copper pipes, a profile cutting machine for aluminium and copper and a harp welding machine – most of them local, Turkish products. The challenge will now be to pre-adjust the different units and to form a collector production line from the so far still individually working machines.