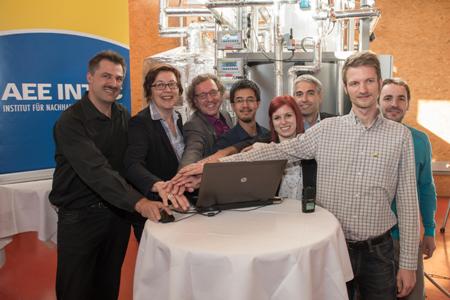 Tanks with high storage capacity and reduced losses are key to an increased solar heat share in households. Austrian research institute AEE INTEC has recently inaugurated a pilot research facility which promises exactly that: greater storage capacity than water and almost zero energy losses even in seasonal mode. The heart of the test facility are two low-pressure vessels filled with 750 kg of zeolite beads or spheres each. “Our first measurements since the beginning of October were very promising,” confirms Wim van Helden, head of the research project at AEE INTEC. “We reached a storage density of 180 kWh/m³, which has never been achieved before in a device of this size.” The research is part of an EU-funded project called COMTES – Combined Development of Compact Thermal Energy Storage Technologies and was co-financed by the Austrian Climate and Energy Fund. Theresia Vogel (second from left), Managing Director of said fund, joined the official starting ceremony on 11 November 2015.
Photo: AEE INTEC
“Within COMTES, we work on the second generation of compact sorption tanks,” explains van Helden. “The first generation based on silica gel did not have sufficient energy storage capacity.” This is different with porous zeolite: The hot water from the solar circuit flows through a heat exchanger shaped like wheel spokes around a vertical axis at the centre of the vessel (see the figure below). During the desorption/charging process, the solar heat dries out the zeolite spherules, which means that water is driven out of the porous material and condensed in an external condenser. Charging with 180 °C from a vacuum tube collector field will result in the record heat storage value of 180 kWh/m³, according to van Helden.
Since the vessel is hermetically sealed, there will be no energy losses even over longer periods, because the dried zeolite can cool down to ambient temperatures without losing storage capacity. Pretests have also proved that the adsorption/de-charging phase – when water is added to the dried zeolite – can reach temperatures above 75 °C, making the process suitable for heating tap water. 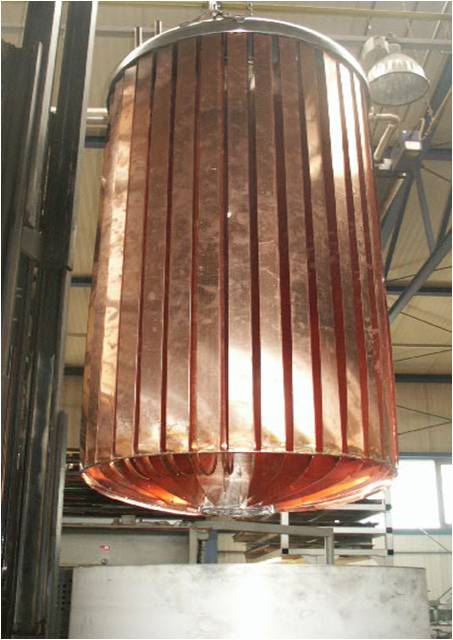 View of the heat exchanger just before it is lowered into the vacuum vessel.
Photo: AEE INTEC
The test facility at AEE INTEC is sized to simulate demand by a single-family household. One of the two vessels is used on a day-to-day cycle, whereas the second vessel is employed to simulate seasonal storage processes. “Originally, we wanted to start testing already in July, but first we had to solve some technical issues with peripheral components of the test stand. The test facility was finally ready at the beginning of October.”
Van Helden lists the steps taken at AEE INTEC for a successful improvement of the test facility’s compact solid sorption tanks as follows:
Other challenges remain and one of them is the costs of zeolite spheres. “The industry offers it at 4 EUR/kg, which is much too high considering that seasonal storage for a single-family house needs to have a volume of around 6,000 kg,” explains van Helden. But zeolites are also an important component of washing powder and in this mass market, the material is traded at few cents per kg. The second crucial factor is available R&D funding. “To commercialise the solid sorption technology in the heating market, it needs ten times the budget we have spent so far,” emphasises van Helden. This means that the promising results of COMTES and other research groups in Europe must convince public R&D funds as well as the chemical industry to invest heavily in this technology.
More information:
http://www.comtes-storage.eu
Links to the mentioned institutions:
http://www.klimafonds.gv.at
http://www.aee-intec.at
http://www.itw.uni-stuttgart.de