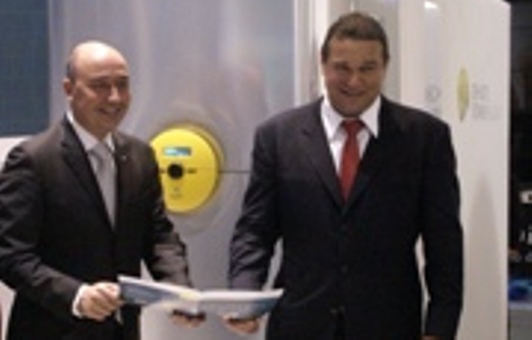 Kioto Clear Energy wants to establish itself as a solar thermal system supplier on the international solar thermal markets. The Austrian company group, which owns 50 % of OEM collector manufacturer Greenonetec, presented its “Sonnenheizung” (solar heating) at the international heating fair ISH in Frankfurt in March. The photo shows Helmut Walten, Manager of the Solar Thermal Division at Kioto Clear Energy, and Robert Kanduth, founder and chairman of the board of Kioto Holding.
Photo: Bärbel Epp

The “Sonnenheizung” consists of a 15 m2 collector field, a 1,000 litre buffer tank, and an air/water heat pump, as well as an electric element as a backup for cloudy and cold winter days. At first glance, it proves to be a rather common setting. To understand why the R&D period lasted five years, one has to look at the system’s special features:

“Our system retrieves the maximum sunlight possible,” summarises Walten. “The energy from the solar collectors can already be used at much lower temperatures compared to common solar heating systems”. To the question of how many kWh/m2 of solar energy the collector field retrieves more than collectors of conventional solar heating systems, Kioto’s head of R&D Christian Wehling refers to the increased annual performance factor of the heat pump: “We reach annual performance factors of 3.4 for the “Sonnenheizung”, as has been measured in a single family house by Austrian research institute AIT, whereas common air heat pumps reach an average of 2.6.”

What might be seen as a disadvantage – especially in times of political discussions about the future of nuclear power – is that the heating system increases the electricity demand of a household, because the heat pump as the major heating element is run by electricity. Furthermore, the temperatures in the collector, as well as in the piping of the solar circuit can fall below dew point, which means the piping must be well insulated and the collector designed to let condensation water drain off.

The “Sonnenheizung” is market-ready by now. Its primary sales targets are the Central European markets. Kioto Clear Energy has still been negotiating with different strategic partners regarding the marketing and sales of the new solar heating system. “Our Plug & Play system is cutting-edge technology and opens interesting new market possibilities,” explains Walten. Prefab builders could be an interesting costumer group.