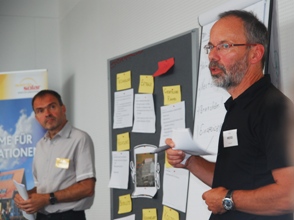 Hackstock is convinced that large-scale projects need system providers which can offer a complete service package. “Based on experiences from our former workshop, the main obstacle for large-scale solar thermal is unsolved questions regarding liability and risks,” he says. If solar thermal companies want to push large-scale plants, they need to address these issues. “With a full service package, I mean not only supplying and planning a solar system. System providers also need to consider plant operation and financing. Also, they must make a thorough assessment of the customer’s energy system, including energy efficiency measures,” Hackstock says. The association chair, however, does not believe that most solar companies could take this step all by themselves. To bring all parties at one table, Austria Solar organised a workshop, which took place right before the Gleisdorf Solar 2012 conference in September.

The workshop was more teamwork on projects than presentations on a normal conference. PowerPoint presentations were banned. The first item on the agenda was to show the development of an actual 1,000 m2 solar process heat plant in a food-processing company. Christian Holter, CEO of the Austrian engineering company S.O.L.I.D. gave an introduction on the project and demonstrated the key points in planning the factory. Besides the technology, planning was to cover the legal framework, from structural analysis of the roof and eco-audits to all necessary contracts with suppliers and customers. Project planning should also cover needed insurances (not only for the plant, but for the loan as well), the commercial value of the installed plant, information about all relevant parties and, of course, information on financing, including incentives.

Next, two bankers explained how they would check a project in real life. The bank would verify all insurance and legal issues, as well as the energy output calculation. The technology itself should not be too complex and should be explained in a comprehensible manner, so that non-specialists can understand it, too.

A very depressing fact for solar thermal companies: Bankers seem to consider only 10 to 20 % of the original cost for assessing the commercial value of a set-up plant. Another important point was that bankers want to have one contractor for Engineering, Procurement and Construction (EPC) who takes responsibility of the entire project. The financial aspects were not only to be presented as costs and savings, but from the bank view as well. This means: cash flows, return on investment and various business cases. On average, the minimum volume for project financing was EUR 5 million, due to the great efforts in checking and verifying the statements. The volume could be lower in case of replication projects.

Hackstock is confident that over time, solar thermal will grow bankable similar to photovoltaics. “In case of photovoltaics, banks do no longer need to check all the details. Both components and calculations have been examined closely in former projects and with experience, the confidence in the technology grows. In addition, if PV funds ask for a loan, it is bankers talking to bankers: they speak the same language,” he says. As a last step, an EPC contractor explained his point of view, together with some key facts about project management.

After the “screen play” on the flip chart, the participants worked together on a real project. Data was provided by an international beverage company. In a short video which was recorded for the workshop, a manager of the company outlined his requirements for a solar thermal plant and the chosen site. Based on that data, the participants came up with a first estimate on how an adequate solar system might look like. “We invited only participants who already had some experience with large-scale solar plants, so that the forecast would be more precise,” Hackstock, initiator of the workshop, explains. The exercise showed that only a cooperation of EPC contractors and solar planners made it possible to meet the high requirements of a potential investor. The beverage company was eager to receive the results of the workshop. It is still unclear, however, if they will invest in solar thermal later.