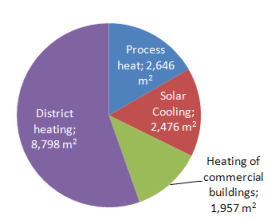 The results have convinced the sceptics: The interest in large solar thermal systems between 100 and 2,000 m2 of collector area has been enormous in Austria. 76 requests have been submitted in the framework of the incentive programme “Solar Thermal – Solar large-scale" started in June 2010. 41 applicants received consultancy by one of the participating Austrian research institutions and submitted the application documents before 15 October. The chart shows the respective application areas of the 41 proposed projects totalling 15,877 m2 of collector area.
Figure: AEE Intec

Which means: the funding budget is too small to cover all requests.. “We estimate that around one third of the proposed projects will have received a funding approval before the end of 2010,” Roger Hackstock says. The Managing Director of the Austrian solar industry association Austria Solar proposed the incentive scheme at the beginning of 2010. He is very pleased about the announcement by Austria’s Environment Minister Niki Berlakovich stated in a press release on 20 December 2010, “that the Austrian Climate and Energy Fund will again support large scale solar thermal systems with a total budget of EUR 3.1 million in 2011”.

In 2010, the overall budget of the programme was EUR 2 million. The first EUR 1.6 million had been reserved for subsidising 40 % of the investment costs of solar thermal systems by strictly following the principle ‘first come, first served’. Another EUR 400,000 was approved for consultancy and monitoring. Applicants of the 41 proposed projects were required to consult twice with a participating institution. The research institutes will accompany the commissioning phase of the solar installation and inspect the monitoring system. They are also responsible for analysing data from monitoring once a month during the first year the system will be in operation. It has not been announced yet whether a comprehensive research and monitoring programme will also be part of the 3.1 million budget in 2011.