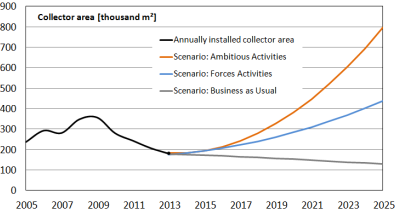 If the Austrian solar thermal sector keeps doing business as usual, newly installed collector area will continue to decrease and end up at 122,000 m² in 2025 (152,000 m² in 2014), while collector area in operation will stagnate at around 5 million m² (4.18 million m² at the end of 2013). This is the key message of the Austrian roadmap Solarwärme 2025 (Solar Heat 2015). In their study, Christian Fink and Dieter Preiß, both from Austrian research institute AEE Intec, conclude that the downward trend is a result of shrinking demand from owners of single- and two-family buildings, especially regarding existing building stock. It seems as if the demand from the ecologically aware clientele has already been met, and it needs new marketing strategies to target other homeowners.
Figure: AEE Intec
The roadmap was published in September 2014 on behalf of three Austrian ministries: the Ministry for Transport, Innovation and Technology, the Ministry of Science, Research and Economy and the Ministry of Agriculture, Forestry, Environment and Water. The 108-page study (in German) has been attached to this article and lists around 100 recommended additional measures to increase the deployment of solar thermal technology in Austria. The authors compare Business as Usual with two other scenarios, Increased Activities and Ambitious Measures, whose market impact is shown in the following table:
Roadmap 2025 scenarios and their impact on the market. In 2012, the Austrian solar thermal sector generated a turnover of EUR 345 million at an annual market volume of 206,390 m² of collector area.
Source: AEE Intec
Pilot phase for solar in existing multi-family buildings
Chapter Applications and Competitiveness describes some of the relevant market trends on which scenario calculations were based. Austria has been successful in opening up new market segments in addition to single- and two-family buildings. Calculations by AEE Intec have shown that the share of multi-family houses in newly installed collector area (209,636 m²) in 2012 was already at 28 % (see the chart below).

Annual newly installed collector area and application shares based on regular market surveys and calculations by AEE Intec
Around 6 % of the 1.9 million households in multi-family buildings are supplied with solar hot water and/or solar heating. Subsidy schemes and the newbuild segment have kept demand stable between 2008 and 2012, with 60,000 to 70,000 m² per year. Deployment of solar thermal systems in existing blocks of flats, however, “is still in the pilot phase and has enormous potential,” was the authors’ conclusion.
20 % of the 1.8 million single- and two-family houses in Austria have already been equipped with a solar thermal system, a much higher share than in other European countries. But the declining deployment in existing single- and two-family houses has been apparent as well: In 2008, around 83 % of new solar thermal systems were installed in existing residential buildings, whereas the share was down to 50 % in 2012. Fink and Preiß conclude that the environmentally aware consumer group, which make up 28 % of the market according to a 2013 survey, have been served, whereas solar thermal system suppliers have not yet been able to appeal to the other two target groups – the ones who are “basically interested in ethical consumption, but need some motivation for it” and the ones who are “in for their own benefit”. Hence, the roadmap authors’ conclusion: Increased acceptance among target groups and new distribution and business models are the key goals besides steady cost reductions.
More information:
http://www.aee-intec.at
https://solarthermalworld.org/wp-content/uploads/2015/04/roadmap_solarwaerme_2025_aee_intec.pdf