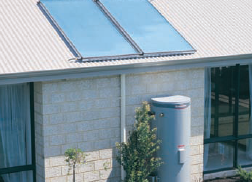 In Australia, solar water heating systems are more and more overshadowed by photovoltaic installations. According to Chris Mundy, General Manager – Renewable Energy at Rheem Australia, the solar thermal market is going to decrease by around 30 % this year compared to the boom year 2009 with around 420,000 m2 of newly installed collector area. Rheem is the market leader in solar thermal in Australia. It has two major brands: Solahart and Edwards.
Photo: Solahart

There are several reasons for the slowdown:

Rheem Australia is considering incorporating photovoltaic components and systems into its product range in response to the PV boom. “We experience an increasing interest in photovoltaic by our clients from the installation business,” explains Stephen Cranch. One way to keep them with Rheem Australia is to offer them PV, as well as solar thermal solutions.