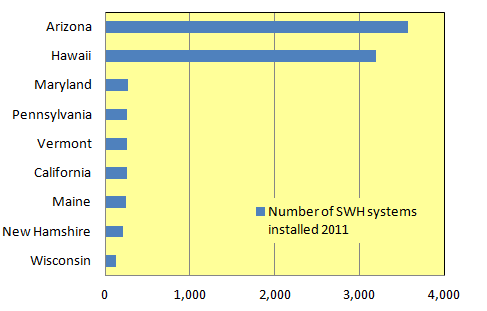 In 2006, Arizona’s utility regulators at the Corporation Commission approved the Renewable Energy Standard and Tariff (REST) stipulating that all utilities are to generate 15 % of their energy by renewable sources by 2025. This gave a push to solar water heating, because the utilities subsidised solar water heaters whenever they offset electric water heaters. In 2011, US-based consultancy GTM Research placed Arizona at the pole position – before Hawaii – in the ranking of the states with the highest number of installed solar water heaters (see chart). But then PV became more popular and led to a drastically reduced demand for solar thermal systems. In 2016, the state’s largest utility, Arizona Public Service (APS), will even let the incentives for solar thermal run out, as their renewable target has already been reached.
Source: GTM Research

According to the REST standard, all utilities must generate 15 % of their energy by renewable sources by 2025. The current Renewable Energy Standard requires a 5 % renewable share in total retail sales, with 30 % having to come from distributed energy resources. Distributed energy resources are installed on customer premises and are used to offset customer load. This includes solar water heating if it offsets electric water heating. With 5 to 7 kWh/day*m2 of solar irradiation and a 52 % share of electric water heating, solar thermal should have had great potential – but the market is small and shrinking.

Little demand after peak years 2009 and 2011
The state’s three largest utilities — Arizona Public Service (APS), Salt River Project (SRP) and Tucson Electric Power (TEP) — offer their customers incentives if they install a solar water heater based on US Solar Rating and Certification Corporation (SRCC) system standard OG-300. But lately, there have been very few requests for incentives: At APS, the 2015 solar water heating incentive programme started on January 1, 2015. The residential up-front incentive for solar water heaters has been 0.30 kWh/USD on first-year savings based on the OG-300. By July, only USD 80,000 out of a budget of USD 500,000 were reserved or spent for 40 installed and 11 planned systems. APS-subsidised solar water heater installations peaked in 2009 with 2,011 newly installed systems.

The same incentive amount has been paid by Salt River Project. By July 2015, the budget of USD 225,000 had still USD 214,800 left to be allocated. The programme will run until April 2016. SRP reached its maximum of new installations in 2011 with 1,634 new systems. The website of TEP is no longer providing information about solar water heater incentives.

There have been several obstacles for solar thermal in Arizona: Residential electricity prices are around 0.12 USD/kWh and therefore among the lowest in the US, making solar water heaters less competitive. When utilities started promoting solar water heaters after 2006, some companies profited by offering poor-quality systems for USD 9,000 and more, according to azcentral.com, tarnishing the reputation of the technology.

Economic calculation for an OG-300-rated solar water heater in Arizona with 2,800 kWh per year. This calculation only applies to client groups with tax liabilities.
Source: SRP

According to the website of SRP, the rebate of utilities APS and SRP based on first-year saving is worth around 860 USD for a system which saves 2,800 kWh per year. In addition to the utility rebates, solar water heaters in Arizona benefit from 30 % federal tax credits (up to 2,000 USD), as well as 25 % state tax credits (up to 1,000 USD). This leads to purchase costs of USD 2,717, which pay off over 10 years.

Another threat to solar thermal are solar PV systems, as in many areas. The market for solar water heaters declined drastically when net metering for PV was introduced in 2010. Although the Arizona Corporate Commission introduced a monthly fee of 0.70 USD/ kW on net metering in 2013, as the Solar Energy Industries Association (SEIA) explained on its website, it did not change anything. Quite the opposite: Across the region served by APS, 2014 was a record year for PV installations with around 7,500 new systems.

Now, one development might be the beginning of the end of the solar water heater market in Arizona: APS already overachieved their 2014 Renewable Energy Standard requirements regarding distributed energy. In the residential sector, they got to 157 %, in the non-residential sector to 252 %. This means that solar water heaters are no longer a necessity for APS. According to azcentral.com, the utility rebates will most probably run out after 2015, which will likely result in a complete collapse of Arizona’s market.