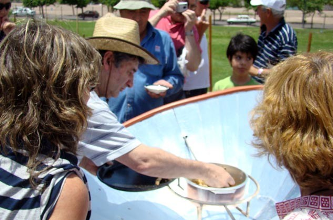 An organisation to support solar energy in Argentina is the Solar City Network (Red de Ciudades Solares), which places the emphasis on solar water heating. Part of their work consists of non-commercial conferences and exhibitions, which take place in various cities across the country. The latest event supported by the Solar City Network took place in Mendoza in November 2011 and attracted more than 600 visitors. Local media even spoke about 1,000 people visiting the Mendoza Solar.
Photo: National University of Cuyo

Some of the visitors of the event may have just been attracted by the delightful smells: Eleven cooks prepared vegetables, pizzas and cakes in solar-heated ovens. But the main purpose of the event was not eating and drinking, but disseminating information about solar energy. In particular, the aim was to inform the people who live in the town of Mendoza and nearby cities (which is roughly 1,000 km west of Buenos Aires) about the existence, availability and actual use of various solar-related technologies. In addition to presentations about solar energy applications and legislation, there was a small exhibition at Mendoza Solar, including nine company booths (of which six were organised by solar thermal companies), and another nine by universities, research centres and environmental NGOs. The event was thought to serve as a platform for exchanging know-how between manufacturers, academic researchers, policy makers and, of course, the general public.

However, as Fernando Paez Yañez, one of the organisers of Mendoza Solar who works for the Instituto de Energía de la Universidad Nacional de Cuyo points out, the events do not have a commercial background. They cannot be compared to trade fairs, also because they rely heavily on the help of volunteers.

“These events have already emerged in several cities across Argentina“, says Paez Yañez. Actually, the organisers of Mendoza Solar had taken up the idea of a similar event in Rosario from earlier last year. In 2011, Solar City events were organised in Campana, Zárate and Rosario (small and midsized towns close to Buenos Aires), Gálvez, Paraná (cities close to Santa Fe) and the city of Santa Fe itself. In the case of Mendoza, it was the first event of its kind, but it will certainly not be the last. In 2012, it is likely to be repeated sometime in September.

The Argentine Solar City Network was inspired by “Cidades Solares” (Solar Cities) Solar Cities in the neighbouring country of Brazil and “Mesa Solar” in Uruguay. The network in Argentina includes volunteers from the seven participating cities, people who have their main profession in a different organisation and company. Formal structures are still nascent.

Apart from the public events, the Solar City Network meets several times a year to talk about how to implement solar ordinances in their cities, which experiences they made with their events and the future direction of the network.