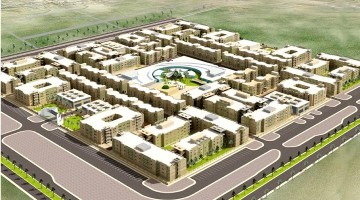 Al Rayan Investment is planning in cooperation with Jordan’s Millennium Energy Industries to install 11,200 m2 of solar water heaters at the Modern Residential City. This project is a result of the hype around renewable energy in the United Arab Emirates. The Modern Residential City will house 25,000 people in 48 buildings and is situated on the outskirts of Abu Dhabi city.

Millennium Energy Industries (MEI) started as an international provider for solar energy solutions in 2002. Focusing on the Middle East North Africa (MENA) region, the company has been chosen by Al Rayan Investment, a joint stock company specialising in investments, to install solar water heaters (SWH) for the Modern Residential City. “We were chosen by Al Rayan Investment for this project because of our proactive work, experience and references in the region. We are providing commercial scale solar heating and cooling solutions for the entire MENA region,” Bashar Muhtadi, general manager of MEI, explains.

The Modern Residential City was developed according to the federal policy of accommodation for residential workers. It plans to contribute to Abu Dhabi’s government goal of a 7% market share of renewable energy by 2020. The city will house 25,000 people in 48 buildings, all of which will be equipped with tailor-made solar water heaters.

The entire solar thermal systems provide 1.3 million litres of solar heated water daily. The 350,000 m² complex will be equipped with 11,200 m² of SWHs to supply hot water during both peak and off-peak periods. Installing SWHs instead of traditional water heaters will result in massive capital savings. They are believed to amount to 30% of the costs, or US$ 3 million. In the long term, Al Rayan Investment estimates saving approx. US$ 8 million by selecting SWHs instead of conventional heaters. The systems are planned to be installed later this year.

Millennium Energy Industries has also completed other major projects in the MENA region, such as Rotana International Hotels, the Jordache Jeans Factory and Mövenpick Hotels. The Modern Residential City project is still the largest of its kind in the United Arab Emirates and ties in with Abu Dhabi’s plan for the “green” Masdar City. At present, Masdar City is no doubt the most ambitious renewable energy project around the globe. The goal of the project is to be the world’s first zero-carbon and zero-waste city. “What Masdar has done, and the Abu Dhabi government, in increasing awareness of sustainability, has created a high level of interest in renewable energy,” says Ennis Rimwani, Chairman of MEI.

The Jordanian company will continue to focus on new developments in the United Arab Emirates, especially with Abu Dhabi’s strong intentions to be the market leader in new and sustainable energy technologies.

This text was written by communication professional Hanna Schober, who is based in South Africa. schober_hanna@gmx.at