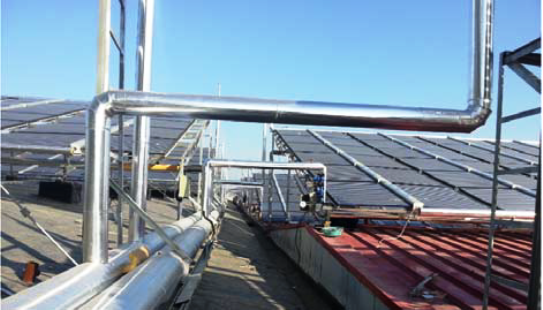 The coastal province of Shandong is not only a pioneering force in China’s solar thermal industry, but it is also leading in the support for solar process heat and space heating in manufacturing businesses. Four years ago, the provincial government launched Solar+, a support scheme that has so far funded 573 solar systems for space heating and solar process heating, according to the Shandong Solar Industry Association. Solar+ is part of a larger support programme named Green Power in Industry, which also provides incentives for efficient boilers, LED lighting solutions and other energy efficiency measures.

Photo: Linuo Paradigma
The government pays between Renminbi (RMB) 4,500 and 7,500 (EUR 600 and 1,000) for each tonne of solar hot water capacity provided by solar thermal. “Because of the subsidy scheme, we’ve seen a growing interest from manufacturing businesses in solar heat technologies,” said Jennifer Fan, Sales Director at Linuo Ritter International, a Shandong-based manufacturer of vacuum tube and flat plate collectors. The support programme offers customers in industry a chance to cut the payback periods of the systems by covering between 20 % and 40 % of investment costs, depending on the type of collector.
However, the prerequisites for Solar+ can only be fulfilled by large heat consumers which need over 150,000 litres of hot water daily. The specifications in the latest call for projects, as published by the industry and finance departments of Shandong in August 2018, list the following funding requirements:
At some sites, Fan noted, the areas on which solar fields could be put up might not be large enough to provide the hot water needed by large manufacturers. Project proposals have to be submitted before 15 November 2019, with subsidies capped at RMB 2 million (EUR 0.26 million) per project.
Shandong is home to much of China’s collector manufacturing industry. According to the Shandong Solar Industry Association, sales peaked in 2018, when the total amount of collector area additions rose to 25 million m², an increase of 26 % compared to the prior year. In all, 40 % of China’s capacity added each year is installed in this province alone.
The statistics for total capacity in operation paint a bit of a different picture. Figures supplied by the association show that 118 million m² had been installed in Shandong by the end of 2017, a fourth of the 447 million m² put up all across China at the time. The country’s 13th Five-Year Plan (2015-2020) stated that in Shandong 22 million m² would be added in the following three years to get to a total of 140 million m² by 2020.
This article was written by Zhiyong Tian, a researcher at the Norwegian University of Science and Technology in Trondheim. His work focuses on large-scale solar thermal applications and the efficient use of solar energy in low-energy buildings, tianzy0913@163.com .
Related news:
http://www.sohu.com/a/258410514_99904970
http://www.shandong.gov.cn/art/2018/9/21/art_2259_28611.html
http://www.ne21.com/news/show-111067.html
http://www.chinanews.com/cj/2015/07-04/7384416.shtml