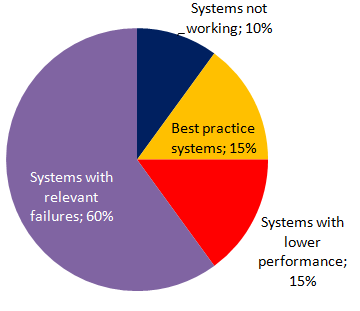 Italian turnkey system provider Reseda has carried out a research project, called SolarCIP, to investigate the real performance of a number of solar thermal installations after they have been in operation for some years now. From 2007 to 2009, Reseda staff inspected 430 mostly residential hot water systems onsite to analyse the performance and detect common failures. The pie chart shows the overall research results with only 15 % of best practice cases. 10 % of the plants were not operating at all, often because fluid leakage from the pipes or an incorrect expansion vessel size had forced the systems dry.
Source: Reseda

The installations which were not working at optimal performance have been divided into two categories: systems with a performance lower than expected (15 %) and systems with failures reducing their lifetime (60 %). And the reasons for this non-optimal performance? Almost half of the plants (45 %) showed errors in the design phase or mistakes in component choice, and 36 % primarily failed because of incorrect commissioning. Only 19 % of the plants displayed a reduced performance caused by failures in system components, 5 % by failures in solar collectors, and 14 % had defects in other components.
By statistical extrapolation of the collected data, it was calculated that 20 years after their commissioning, about 50 % of the plants could still be working and the best systems could still be operating even for another ten years after that. Another interesting outcome: Even if the systems were not performing very well, the owners declared to be fully satisfied with plant performance.
About 89 % of the analysed systems provide domestic hot water, which corresponds to their market share in Italy. Slightly more than 10 % were combi systems, also providing space heating, and less than 0.5 % (3 systems) were solar cooling units. Regarding technological aspects, 77 % of the plants had flat plate collectors, while 23 % incorporated evacuated tubes, and 86 % were pumped systems, while 14 % were thermosiphon installations. On average, the systems were 5.6 years old when the inspections took place.
Common failures
The failure most often found by the inspection team was an undersized pipe insulation, present in about 70 % of the systems, followed by an incorrect installation of the expansion vessel, as well as leakage in the primary circuit and in the valves in one out of two systems. Almost the same number of failures was identified for other problems, such as undersized storage insulation, a non-regulated mass flow, an undersized expansion vessel and pipe insulation damage, for instance, caused by bird bites.
One plant out of four also showed a non-suitable safety valve, whereas about 1/5 of the systems had several severe issues: errors in connections between collectors and circuit, wrong heat exchanger dimensions and wrong safety valve positions.
The most interesting and relevant outcome of the study has been that the majority of the problems arise in conventional hydraulic components, mostly because of a wrong valve choice or poor installation. As a matter of fact, failures of the heat transfer fluid have been detected in only 8 % of the plants and damage in the solar collectors showed up in less than 3 % of the systems.
Reseda is a cooperatively owned company, whose office is located near Rome, Italy. It has been supplying turnkey solar thermal and PV plants since 1999 and has also carried out small research projects as well as provided environmental education.
More information:
http://www.resedaweb.org