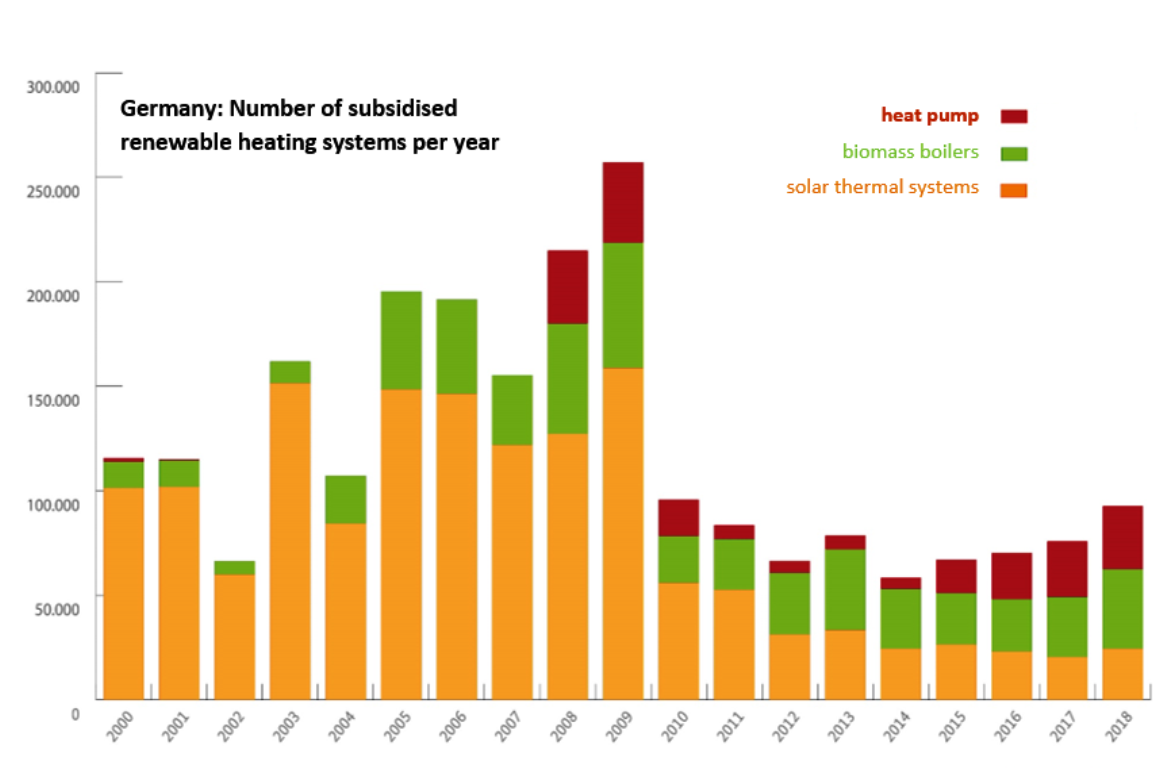 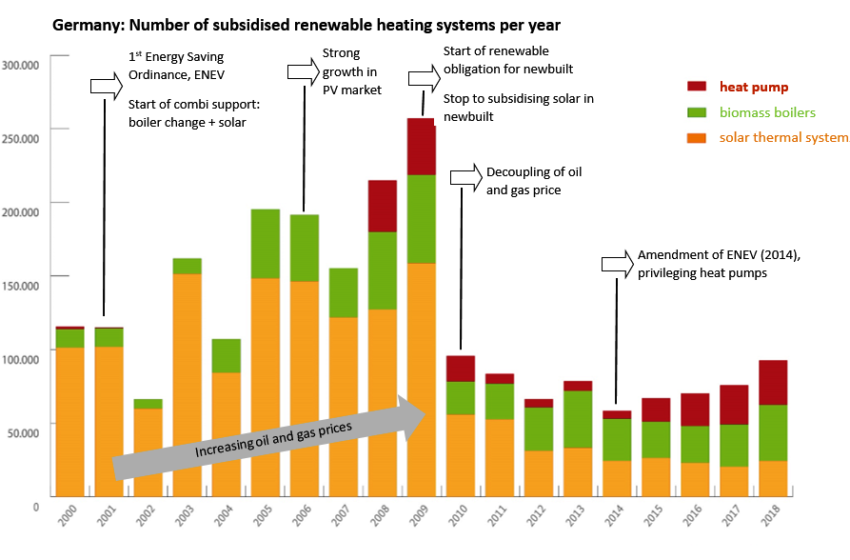 The start of this month marked the 20th anniversary of the German Market Rebate Programme, also known as MAP. At the time, it was the country’s first set of funding guidelines for renewables. Since coming into force on 1 September 1999, MAP has paid out about EUR 3 billion to support more than 1.8 million renewable heating units, while total investment in these systems has exceeded EUR 23.7 billion. BAFA, the agency managing the programme, has now published a brochure (attached to this news article) which showcases the achievements of MAP over the past 20 years (see also the chart above).
Source: BAFA
MAP funding is available for solar thermal collector systems, biomass combustion plants and efficient heat pumps. In addition, BAFA is offering application-specific incentives, for example, to promote solar process heat and solar cooling, and also funds efficiency upgrades. For more information on the support scheme, please see the database of incentive programmes.
“MAP has encouraged the use of renewable energy all over the map, but for the so called Wärmewende – heat transition – its impact is not enough,” industry association BSW Solar stated in a 3 September press release. “Unlike the feed-in tariff for renewable electricity, MAP receives its funding from the government, which makes for less secure investments and lower competitiveness.”
The number of applications for renewable heating incentives has fluctuated significantly in the past 20 years. It increased annually until the peak year of 2009 after which it dropped and has remained at a low level. Demand for solar thermal systems especially has been in steady decline.
The comments added by German-based solar thermal consultant Dietmar Lange to the following chart show what an impact political decision-making has had on market growth over the past two decades.

Yearly BAFA statistics, including factors that had an impact on the number of applications
Source: BAFA, political decisions added by Dietmar Lange
Demand started to rise in 2001 when two new regulations took effect: the first Energy Savings Ordinance (ENEV) and a support mechanism to help building owners to replace fossil fuel boilers each time they added a solar thermal system as well. Rising oil and gas prices then kept demand high until 2009.
The big decline in 2010, when the number of applications dropped to less than half of what it used to be, was the result of the global financial crisis and the related fall in energy prices. But the steep drop in demand was also caused by changes to national policy. In 2009, Germany’s government introduced the national renewable building standard for newbuilds. Consequently, a key pillar of the market, i.e., solar thermal systems in newbuilds, was no longer supported by MAP, and so people began adding insulation or biomass boilers to comply with the new building standard.
The following years showed a shift away from solar thermal towards biomass and heat pumps. Heat pumps became a burgeoning market when energy labelling was introduced in 2015 and nearly all of them received the best possible rating (A+++) thanks to a lower primary energy factor for electricity. This factor is part of the energy savings regulations that were amended in 2014.
Estimating growth in the solar thermal sector in Germany is difficult. A law to promote climate action is currently under discussion and a set of measures could be introduced by 20 September.
Read further news about MAP:
Up to 55 % investment subsidy for solar process heat, February 2019
Germany: Process Heat Supply from Vacuum Tubes and Air Collectors on the Rise, April 2017
Germany: High Rebates Not Enough to Offset Market Decline Due to Cheap Fossil Fuels, Februay 2017
Germany: “Performance-based incentives for all solar thermal plants”, November 2016
Germany: Label for Existing Heating Boilers to Increase Retrofit Share, August 2015
Germany: National Subsidy Scheme Gets Significant Amendment, March 2015
Germany: Strong Decrease in Retrofit Market for Solar Combi Systems, May 2014
Institutions mentioned in this article:
BSW Solar: https://www.solarwirtschaft.de/en/start/english-news.html
BAFA : https://www.bafa.de/EN/Home/home_node.html
https://solarthermalworld.org/wp-content/uploads/2019/09/ee_20jahre_map_broschuere.pdf