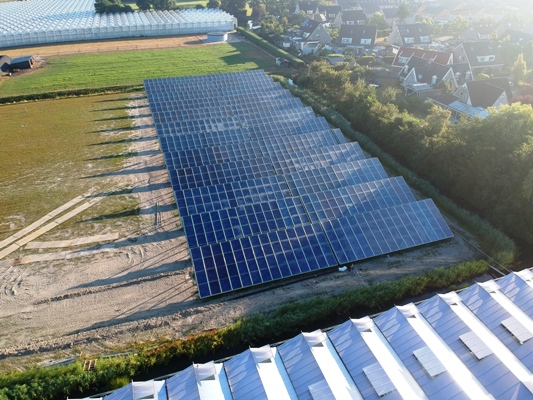 G2Energy, a Dutch-based supplier of turnkey solar thermal systems, has completed one-quarter of a 10,000 m², or 7 MWth, solar field ordered by freesia grower Tesselaar. The system provides heat for greenhouses in Heerhugowaard, Netherlands, and will soon replace all the gas boilers on site. Excess solar heat produced in summer is stored in boreholes underground. Recently, Tesselaar has given the go-ahead for the remaining three-thirds of the EUR 2.5 million solar installation after the first 2,500 m² section had been put to the test and delivered. G2Energy is planning to finish the entire project during the last three months of 2018.
Photo: G2Energy
Whoever grows flowers in the Netherlands needs to prepare for a long heating season. Even in spring from March till June, there is no shortage of cold nights, so that heating flower-filled greenhouses is a must. During the day, the solar field at Tesselaar raises the temperature in a 1,400 m³ hot water tank to 60 °C, and at night, that heat is transferred to water radiators inside the greenhouses. Any surplus during summer is stored underground. According to G2Energy, the borehole-stored water can reach 35 °C in winter. “We added a heat pump to the system to increase the ground temperature by 5 °C to the 40 °C required,” said Arjan de Bruin, one of the project coordinators at G2Energy.
It is the company’s first time designing and installing a large solar system. According to de Bruin, the business usually builds solar fields of between 200 m² and 700 m² for farmers and other commercial clients. But the country’s national subsidy scheme SDE+ now provides a favourable environment for solar investments by large heat consumers. Tesselaar will receive a maximum of 7.8 EUR cents/kWh over 15 years for heat generated during an annual 700 operating hours at full capacity.
Drainback technology to avoid glycol
G2Energy manufactures collectors in Uddel, close to Apeldoorn. At the flower farm, it used flat plate collectors which included aluminium absorbers and selective coatings. They were put up on grassland next to the greenhouses filled with freesias.
A special feature of the system is the use of water for heat transfer. “Drainback technology has been part of all our solar thermal systems, so there is no glycol present in the solar circuit,” de Bruin said. Temperatures below zero will cause a drain in the circuit to prevent pipes from freezing and bursting. The 10,000 m² field is divided into 96 subfields. Water recovered in any of these sections is stored in a 30 m³ tank in a basement.
G2Energy has stated that it would integrate a monitoring and a remote-control unit into the solar installation to check system performance from its office in Uddel.
“We have won a tender for building an even larger greenhouse solar heating system of about 15,000 m² for a flower farmer,” de Bruin announced. Construction is scheduled to start in 2019. As a 30-staff business, G2Energy had successfully competed against much bigger companies from abroad, de Bruin said.
Organisations mentioned in this article:
https://www.g2energy.nl/
https://english.rvo.nl/subsidies-programmes/sde